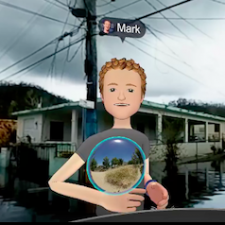 Facebook CEO, Mark Zuckerberg, visited Puerto Rico live in Virtual Reality on Facebook Spaces to talk about how, “This is an area that Facebook is very focused on trying to help out in the recovery effort.”

Zuckerberg was live at 22:55 BST yesterday and was joined in the virtual space by Rachel Dwyer, head of Facebook’s social Virtual Reality team. They appeared in 360-videos and photos of Hurricane Maria-hit Puerto Rico. “It feels like we’re really here in Puerto Rico, where it’s obviously a tough place to get to now and a lot of people are really suffering with the aftermath of the hurricanes,” said Zuckerberg.

The purpose of the live video was not virtual tourism in the aftermath of a natural disaster; Zuckerberg announced a new Facebook relief effort for Puerto Rico, working with the Red Cross.

“We use artificial intelligence to build what we call ‘population maps’. So you can look at satellite imagery of an area, and get a sense of where it is that people actually live, and the density of different places, and where there’s infrastructure going to those places, and that’s gonna help The Red Cross figure out where people are, who need help,”

He went on to say that, “This is a good example of how you can use AI and machine-learning to help out saving people’s lives and help out in relief efforts like what we’re trying to do with the Red Cross here.”

Zuckerberg talked about how existing Facebook features such as ‘safety check’ and ‘community help’ aided in the recovery effort by interconnecting people and allowing that, “People in the community could tell all their friends and loved ones that they were safe,” and so, “People could say they needed food or shelter and people in the community could provide that if they had that.”

According to Zuckerberg, Facebook has donated “more than $1.5m” to relief funds for Puerto Rico. You can donate to the Red Cross and Unicef.