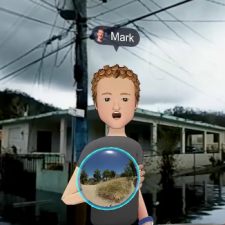 Facebook CEO, Mark Zuckerberg has apologised for yesterday’s VR livestream that saw him appear in Puerto Rico, which had recently been hit by Hurricane Maria.

Commenting under the video of the livestream on Facebook, Zuckerberg said, “My goal here was to show how VR can raise awareness and help us see what's happening in different parts of the world. I also wanted to share the news of our partnership with the Red Cross to help with the recovery. Reading some of the comments, I realize this wasn't clear, and I'm sorry to anyone this offended.”

The original stream and video may have been seen as an opportunistic marketing and PR attempt by Zuckerberg; as he initially talked about it being, “A big week for Virtual Reality,” saying, “We have Oculus Connect 4 coming up,” before eventually leading into talking about Facebook’s aid efforts in Puerto Rico.

Given the devastation Hurricane Maria has caused, with Reuters reporting yesterday that the death toll in Puerto Rico has reached 43, some found the video offensive and questioned the CEO's understanding of the public. Facebook user Eve Peyser wrote, "definitive proof that marcc zuccerberg [sic] is an android".

Others were more positive with their comments, such as Brenda Maldonado who said, "Thank you for caring about our people in Puerto Rico!" and Karmen Yrene Lafontaine Batista who said, "I live on the Island, I thank you and absolutely cannot understand why would someone be offended by this".

Mark Zuckerberg and Rachel Dwyer had appeared as virtual avatars of themselves, via Facebook Spaces, for the video stream. Facebook user Maria Mangiarelli Rippo commented, “It seems it would be way more effective if we could see your real faces. It is so distracting to have virtual characters reporting on a real disaster,” to which Zuckerberg responded, “I hear that. When you're in VR yourself, the surroundings feel quite real. But that sense of empathy doesn't extend well to people watching you as a virtual character on a 2D screen. That's something we'll need to work on over time.”

In just hours, Zuckerberg will present the opening keynote at the aforementioned Oculus Connect 4 event, giving him an opportunity on stage to explain the motivations behind the ill-advised livestream.