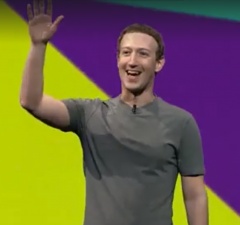 Facebook’s 2-day F8 Developer Conference opened today in San Jose, California with a keynote by CEO Mark Zuckerberg and other members of the Facebook senior management team. While the session covered the whole of the social media organisation’s work in a range of areas, it was VR that we were most interested in.

And we weren’t disappointed - out of an 80-minute keynote, nearly the whole of the first hour was devoted to AR, VR and AI. Just in case there was any doubt, with three-quarters of stage and screen time dedicated to immersive media, Facebook is going big on this tech! So let’s look at what we learned...

AR will make it so we can create things that are only possible in the digital world and we can explore them together.

Zuckerberg finds it hard to resist a joke and opening this year’s F8 is no different, as the CEO opened the event saying it was this week’s second most important F8 event, behind the opening of the latest in the Hollywood series, Fast and the Furious 8.

Jokes aside, Zuckerberg wasted no time getting to immersive media, as he opened with a reference to the ‘cameras’ that have appeared for photos and videos as phase one, but seconds later called Augmented Reality stage two. Note, Augmented - not Virtual – which seems at odds with Oculus’ focus on VR hardware such as the Rift and Gear VR.

Whether this pivot is in response to consumer interest or industry analysts, Zuckerberg explained that, “AR will make it so we can create things that are only possible in the digital world and we can explore them together.” The CEO explained that while, “We’ve started to see primitive examples of these on our phones,” mentioning notes, Pokemon and face filters or style transfers, “It seems so basic - just what kids are into doing.” But Zuckerberg expanded that, “We see the beginning of a new platform.” He acknowledged that while, “We all want glasses, or eventually contact lenses, that feel normal... We’re using primitive tools because we’re still on the journey to building better ones.”

As Zuckerberg put it, “We’re all about extending the physical world online. AR will help us mix the digital and the physical in all-new ways that will make our physical world better.” He went on to describe how much ‘better’, more affordable and accessible objects will be if they are available virtually, rather than having to buy real objects.

The CEO used the F8 event to announce today’s beta launch of an open platform enabling users to create their own AR content, granting access to thousands of examples from all over the world and different cultures.

Zuckerberg explained that AR is reliant upon realistic 3D objects with precise location information, using ‘Simultaneous Location And Mapping’ (SLAM). He illustrated this with a demo of a breakfast table with caption and circling sharks, detailing how important advanced AI is to mapping the scene in 3D.

Their tech is able to map a 3D scene from a still photo, as demonstrated by a scene drawn from a 2D picture of Facebook’s Seattle office, where he could add lighting, as well as effects like water, bouncy balls or Skittles... “Because the future is delicious!”

It sounds like a frivolous scenario, but Zuckerberg used the example to claim that, “We have some of the best computer vision and object recognition in the world,” leading to examples such as the AI being able to recognise and contextualise objects, suggesting relevant filters such as illustrating steam on a cup of coffee, or flowers on potted plants.

New Genre Of Games This Year

“There’s going to be a whole new genre of AR games.” As if that wasn’t tempting enough, Zuckerberg added that, “This part of the platform is going to come later this year.” But AR isn’t all about games, as he was keen to evidence with the way that walls in FB HQ have already been turned into virtual art installations where, “People are gathering around just looking at blank walls!”

This changes how we use our phones - and eventually, all our technology.

In terms of everyday usage, the CEO imagines a future where you can leave a note in a restaurant to tell your friend what the best dish is, right next to the specials board, or leave a note for your partner on the fridge. Never one to shy away from a soundbite, Zuckerberg claimed, “This changes how we use our phones - and eventually, all our technology.”

We’re already reeling from the front-and-centre focus that Zuckerberg placed on the VR/AR future for Facebook in his F8 opening keynote, but the CEO was far from done when he dropped the bombshell that, “Tomorrow, we will hear more about the work going on in Building 8 that’s even further out than AR.” He’s only talking about, “Direct brain interfaces [that] let you communicate using only your mind.”

We’ll bring you more news from F8 when we have it...