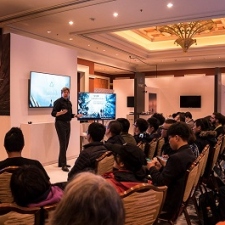 HTC has announced its partnership with Intel to create a WiGig powered wireless VR add-on. WiGig is a new internet connection which uses channels in 60 GHz to transmit data at multi-gigabit per second speeds whilst maintaining low latency at distances of up to ten meters.

The significance of WiGig in wireless VR becomes immediately apparent, with latency being the greatest challenge for those creating wireless VR products. Products using standard WiFi wireless options, like TPCAST’s Vive add-on, can have significant latency delays that intensify the problem of motion sickness due to out-of-sync movements. It seems HTC plans to remedy this problem with WiGig, which potentially has enough speed to wirelessly render images to the Vive without any noticeable delays for the user. WiGig could also help wireless VR get over another hurdle; image compression. Its multi-gigabit per second speed could reduce the amount of compression needed to stream VR experiences from PC to HMD, resulting in higher resolution.

In-depth details about the actual product that will come about from HTC and Intel’s partnership have not yet been given by the companies, but research suggests that 2017 will be a critical year for WiGig in the transition to cable-free devices. With this in mind, we’re estimating that HTC and Intel plan to bring their product to the market at some point this year.