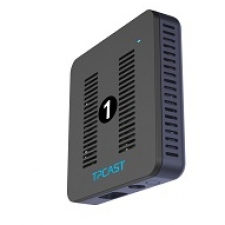 TPCast, has announced its Business Edition tether-less upgrade kit for the Vive, the world’s first multi-user tether-less VR solution that allows up to six users to interact in one physical space. This has been developed to bring the freedom of tether-less VR to numerous VR vertical markets including arcade, theme park, education, real estate, travel, furniture, automobile and more. The announcement was made at the fourth annual meeting of HTC’s Virtual Reality Venture Capital Alliance (VRVCA) in San Francisco.

Michael Liu, CEO of TPCast said, “We believe this industry milestone will really change the game completely for multiuser VR and ultimately unleash the tether-less VR world!” The Chinese company was one of the first teams from HTC’s $100 million accelerator program, ViveX.

TPCast BE will be available later this year.