Netflix And HBO On Daydream 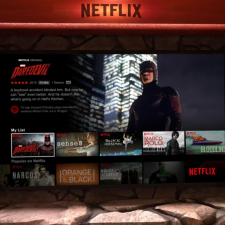 Google continues to uphold its promise of more apps for Daydream close after launch, as more new apps have been released. Two of the most anticipated Daydream apps, Netflix VR and HBO GO VR are now available on the Google Play Store. Netflix VR is separate to the regular Netflix and a VR-specific app, where users can watch Netflix shows in a luxury virtual theatre environment. HBO GO VR includes every episode from every HBO original series, including Westworld, Game of Thrones and Ballers - log in with your active HBO GO account, and you’re in.

Netflix VR has remained exclusive for Gear VR until now. With the app being available on Daydream, Google’s platform now has another way to compete. Daydream View’s comfort-focused design makes it a great travel option - users can enjoy their favourite TV shows and movies on that long-haul flight or train journey, with a VR headset that’s easy to wear and easy on the eyes.

Along with these two game-changing apps, some more additions to Daydream’s gaming line-up hit the Google Play Store: