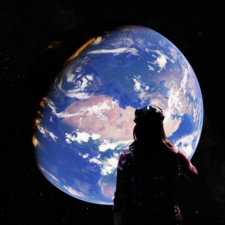 Google Earth VR is now available for free on HTC Vive, letting users explore the world from new perspectives in VR. Users can walk, fly or take guided tours around any location on the planet. Earth VR is the second Vive title that Google has released after Tilt Brush, the award-winning 3D painting app.

To pick where they want to explore in VR, users are sent into space and presented with a small, rotatable version of the Earth. You can use Vive’s controllers to zoom toward the planet, where you will begin to see labels of locations that become specific the closer you go; countries, states, cities and even towns can be selected. Once you’ve chosen a location, you can explore it by either walking at ground level or soaring around in the air, both of which use the controller for direction. Currently, there is no search function in Earth VR, but users can bookmark locations they have manually explored by taking a virtual photo, making it possible to return to it at any time.

For now, Earth VR is only available on the Vive; however, Mike Podwal, VR Apps Product Manager says Google is, “Actively exploring support for other platforms”. We can expect more information regarding which platforms Earth VR will come to next year.