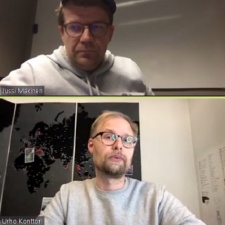 When we get to interview the senior management of a hardware company ahead of an important launch, then over the years we've come to expect a set platter of platitudes and corpo-speak that's PR pre-approved.

By way of contrast - with the public announcement of Varjo's first consumer VR hardware just days away when we spoke with them - we found Urho Konttori, founder/CTO and Jussi Mäkinen, chief brand officer to be two regular guys that just happen to be incredibly passionate about what they do.

Now that Varjo's Aero consumer announcement is a done deal, we're thrilled to be able to share our conversation with you.

Go your own way

Beyond the very public Oculus/Vive duel for the #1 position in VR hardware over the years, Varjo has ploughed its own furrow since launching in 2016. Leading from the front and ostensibly an enterprise-focused company, we first reported on Varjo's Series A funding in 2017 and have kept a close eye on Finland's finest ever since.

Varjo has been teasing today's hardware announcement - that happens to be the filling in a three-week HTC/Oculus announcement sandwich - and despite being the smallest of the three big-hitters, this is the one that we're most excited for. You can read the full hardware reveal here.

The internet has been ablaze in the wake of that teaser campaign with users everywhere crossing their fingers for a top-tier consumer PC VR headset delivering the kind of experience of which the best-selling but budget-minded Quest 2 can only dream. With an impressive track record of market-leading enterprise hardware, Varjo has decided to 'give 'em what they want' and release its 'human-eye resolution' hardware for VR enthusiasts everywhere.

The right product, the right timing at the right scale for the company and now we're taking the plunge.

Now is the right time

Why is now the right time for Varjo to get into the consumer sector? Founder and CTO, Urho Konttori told us that, "The feedback from the enthusiast community has been pivotal when we created this product".

After using Varjo's XR-3 and VR-3 more advanced enterprise headsets, sim gamers in particular said that, "They are not satisfied with what is out there as consumer products". That gave the company, "The faith that the time has come now for us to introduce a professional product that is available for all".

Varjo has focused on expanding its enterprise offering since launch, but speaking about the move to the consumer sector, Konttori said that, "We are now ready. To approach expansion of your marketbase, you need to have a solid ground to take the next footing from".

And with five years of business-focused consolidation behind it, the Helsinki operation has established its presence on the top branch of the VR tree. Now, in late 2021, Kontorri confided that launching consumer hardware, "Felt like the right product, the right timing at the right scale for the company and now we're taking the plunge".

Consumer products usually introduce a lot of compromises and have to reach a low price point. We have not done those compromises.

Human eye for every guy (and gal)

So what can consumers expect from their first experience of a 'human eye resolution' headset? Konttori told us that, "The first time you wear our headset and play a game of Alyx, Flight Simulator or iRacing, it's a whole new world when you can actually see clearly and it's like, 'Wow! This is where we were supposed to be five years back'".

Chief brand officer Jussi Mäkinen told us that, "Consumer products usually introduce a lot of compromises and have to reach a low price point. We have not done those compromises".

Based on extensive user research, Mäkinen told us that, "The community wants more than the current consumer products can offer - and we agree! If we have seen Aero, then try any other consumer headset that's out there, then the difference is very clear - pun intended! I dare to say that it's night and day..."

There's a reason why no one else uses shots like this - we're the only ones that have the balls to put it out!

Much though we are obviously enamoured with all things XR here at TheVirtualReport.biz, truth be told we're not easily impressed after decades of working in the games industry. But one of Varjo's comparison screengrabs in particular made us sit up and take notice - can the Aero really be that good? (See above.)

"It's true! Those are not marketing images", Mäkinen assured us. "They are taken with a camera from the lens. These are non-faked and there's a reason why no one else uses shots like this - we're the only ones that have the balls to put it out!"

When asked about Facebook's pre-emptive strike last week claiming that it was working on a 'retina resolution' headset ahead of Varjo's 'human-eye resolution' consumer announcement, Konttori generously said that, "It was interesting timing.

"It's a very different thing when Facebook will deliver this kind of quality, as their entire model is based on expanding the total addressable market as fast as possible and that means that you need to be hitting some very fundamental price points". As he explained, this means that Oculus needs to move more slowly when it comes to the specs race.

From his time at Nokia and heading up VR headset development at Microsoft, Konttori has experience of the cost-first consumer product market. He recounted that when forming Varjo, they said, "Let's do the ultimate product and actually make a change in the industry first. Let's not worry about the price; let's put the best possible components that allow the radical change in the areas of design, training and enable new forms of research to be done."

The professionals have been pushing us and it shows in the visual quality. That's obviously very different from any other consumer-driven headset companies out there.

Let's do the ultimate

That was the company's starting point, since when it has expanded considerably. "The choice to go directly to this human eye resolution was fundamental because that meant that resolution-wise, we were at the end game and we could concentrate on things that are enabled by the human eye resolution".

Konttori compares this approach with rival companies that are, "Waiting for the future when you have sufficient quality - and we've been focusing on this from the get-go." As a result, business partners now include the likes of the European Aviation Safety Association (EASA), which certified the first VR-based pilot training system using the VR-3, with the Aero now joining it. "We sped up this whole industry's development significantly; not only for our benefit, but for everybody's benefit."

Varjo also works extensively with automotive clients with Konttori explaining that, "This started a complete transformation in the whole car industry of how the designs are done." And the company has now expanded into other areas of industrial design such as consumer electronics and design agencies.

Mäkinen went on to explain further that 'revolutionising workflows' for companies such as Kia led to daily feedback on how they can improve the tiniest visual details. "The professionals have been pushing us and it shows in the visual quality. That's obviously very different from any other consumer-driven headset companies out there."

Integrated eye-tracking is going to be the fundamental thing in all headsets in a few years.

There are two well-established routes to developing software across multiple platforms; either aim for the lowest common denominator to quickly and cost-effectively port across all systems for the short term, or work from the top down at the highest quality with a view to capitalise in the long term.

Konttori explained that VR game developers working on Aero titles, "Will be mastering very long-living content, products and pipeline as the quality level is going to be sufficient for the next half a decade."

We've been talking about consumer headsets featuring eye-tracking for years now and with its no-compromises stance, Varjo is about to deliver. As Konttori said, "Integrated eye-tracking is going to be the fundamental thing in all headsets in a few years' time. If [developers] utilise that now, your content will be suitable in the future, both for interaction purposes, as well as building foveated rendering pipelines".

This is the reference quality that all developers should develop against because they are future proof.

As well as the Aero's impressive resolution - see our launch article for full specs - Varjo's first consumer hardware offers a wide dynamic range with improved brightness that Konttori described as, "The next level of fully HDR-capable headsets," - albeit at 150 nits rather than the 400 nits of the movie industry.

What does that mean in practical terms? "When you look at the reflection of light, it really starts looking like it's a light reflecting there, instead of a muted photo of a light."

We're promised a 'fully calibrated colour space' that can accurately reproduce Pantone colours for professional designers. Mäkinen picked up on this saying, "Varjo Aero is like the reference monitor for VR game development".

He also said that existing Steam VR games will look better on the Aero. Part of that is down to Varjo's custom variable resolution lenses that enhance resolution in the middle of the viewing area, unlike the more common fresnel lenses. "This is the reference quality that all developers should develop against because they are future proof."

But could the Aero's higher resolution display embarrass less ambitious developers? Konttori warned against environmental textures that don't scale because they've been designed with lower resolutions in mind such as, "When you are mastering for mobile headsets like Quest 2, where you need to be super frugal on textures because the memory bandwidth is so limited and the GPU gets choked."

There's now access to a non-compromised reference-quality visual fidelity that anyone can get.

Varjo has an enviable business customer network with its existing hardware and the Aero will continue to support those clients that have been asking for lower PC requirements, while also expanding its audience to include consumers.

It seems like a no-brainer in terms of business and as Mäkinen said, "There's now access to a non-compromised reference-quality visual fidelity that anyone can get. Varjo has been serving the professional market - and we still do, because we believe it's a way for mass adoption - but the time has come to give that access to everyone".

In Mäkinen's own words, "The truth is in putting the eyeballs in!"

We look forward to bringing you an 'eyeballs-in' review of the Varjo Aero just as soon as we can...