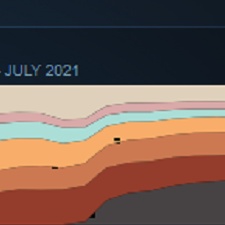 The most popular VR headset on Steam right now is the Oculus Quest 2, according to the latest Steam Hardware Survey (July 2021).

Despite launching as recently as mid-October last year, Oculus' latest standalone Head Mounted Display (HMD) has already built up an incredible 32.56% share of all VR headsets in use on the system. Oculus also holds second place in the chart, with the Rift S at 17.79%. The original Rift CV1 rounds out the top 5 with 5.59%. Even the far more expensive Valve Index beats out the venerable HTC Vive to third place, with 16.23% against 10.37% respectively.

We'd have to conclude that Oculus' rush to bring VR to the mass market with a hugely attractive price point of £299/$299 is a riotous success. At the other end of the market, VR enthusiasts are obviously willing to pay the current asking price of £919 for the 1440 x 1600 120Hz Index. For its part, HTC has increasingly focused on enterprise applications with its Pro and Focus series, but the consumer Cosmos continues to fail to catch the public's attention.

The most popular GPU remains the NVIDIA GeForce GTX 1060, with 8.9% of users. We can only presume these are not the same Quest 2 users for tethered PC VR, because we can tell you from personal experience, that is not a combo that plays well together.