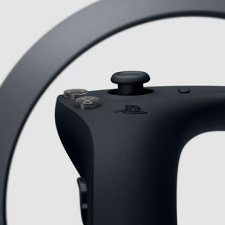 Sony shared the first details on its forthcoming VR headset for PlayStation 5 with developers in a private session this week. We loved the original PS VR here at TheVirtualReport.biz - controllers excepted - so we're happy to hear that the follow-up hardware sounds like it's going to smash it out of the park.

We weren't lucky enough to be invited to attend - we aren't developers after all - but we've scoured the internets to round up the lowdown and confirmed what we found with people who were in the room.

The use of OLED screens should deliver the blackest of blacks, but it's the addition of High Dynamic Range (HDR) that could really set the NGVR apart. The Fresnel lenses are said to offer a 110-degree field of view, which is 10 more than the OG PS VR and 20 over Oculus Quest 2. Sony's sequel scores another point against the Q2 with the inclusion of an
InterPupillary Distance (IPD) adjustment dial to better enable users to find suitable settings.

Anyone that's been working in VR for a while will be familiar with the drive to include eye-tracking in hardware and it will feature in NGVR.

Anyone that's been working in VR for a while will be familiar with the drive to include eye-tracking in hardware and it will feature in NGVR. This not only opens the possibility of gaze-based control interfaces, but also enables Foveated rendering, whereby compute power is reduced by only generating full resolution graphics where the user is looking. Sony also introduced something it calls Flexible Scaling Resolution (FSR) that will work alongside Foveated rendering to further reduce GPU loads.

Another tick on the VR wishlist is the move to inside-out controller tracking, consigning external sensors - or the Move camera - to the tech bin of yesteryear where they belong. Unfortunately, it doesn't seem that NGVR will adopt wireless protocols, but at least the connection to the console will be a single cable instead of the rat's nest we've become accustomed to with PS VR.

The last nugget of information we gleaned about the headset itself is that it will feature haptic feedback not only to increase immersion, but also to help reduce motion sickness. We're told this will take the form of a rotary motor.

We caught our first glimpse of the new controllers a while back and now we understand that they feature capacitive touch sensors for the thumb, index and middle fingers. Rather than a simple on-off state, they measure distance from the controller, which should allow for improved gesture control. They will also feature haptic feedback as per the PS5's impressive DualSense controller.

If we'd been asked to draw up a wishlist of specs for PS VR2, it probably wouldn't look much different to the reality.

One of VR's persisting problems is that many 'games' are little more than VR experiences, something that Sony has made clear it wants to address. The console co has told developers that it wants to see AAA titles on the platform offer both conventional flatscreen and VR support. Of course we'd rather see bespoke titles take full advantage of the medium, but the promise of a forthcoming library of fully-fledged Sony exclusives in PS VR2 is exciting. God of War 2 in VR, anyone?

If we'd been asked to draw up a wishlist of specs for PS VR2, it probably wouldn't look much different to the reality. Okay, we'd have asked for wireless connection, but the resolution and field of view is the equal of the competition - or better - the controllers are proper next-gen and you just know Sony is going to put together something that feels like consumer hardware. If we can just persuade them to make it compatible with PC VR - hey, we can dream, right? - then we're in.

With the promise of launch details to come early in 2022, we predict that we'll all be sitting around the Christmas tree in our PS VR2s next 'holiday season'.

There have been a lot of voices on the internerdle decrying Sony's supposed lack of interest in continuing VR, predicting it would die a quiet death before making the leap to PS5. We did try and tell them...

Watch YouTuber PSVR Without Parole's excellent video on the subject: