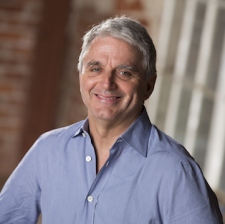 It’s not like we used to have a banana plantation, but now we’re raising chickens.

Having become a key go-to engine for many developers in the mobile games industry, Unity quickly set its sights on supporting virtual reality and augmented reality tech. And it’s proven a successful endeavour; the company claimed during its GDC 2017 keynote that 70% of work in the AR and VR spaces is built using its development tools.

Unity CEO John Riccitiello is bullish on the firm’s place in the market, and tells The Virtual Report it wants to position itself as, “The only legitimate tool that can hold anything in AR and VR”. It’s a bold goal, but having spent years creating technology for developers in the PC, console and mobile space, Unity already has a solid base to build upon for new platforms.

“It’s a significant incremental effort but it’s not an entirely new subject,” says Riccitiello. “It’s not like we used to have a banana plantation, but now we’re raising chickens. They’re in the same category… we’re big fans of the idea of VR and AR and we think in time, it’s going to be a big business.”

A common debate amongst industry analysts is which market will be larger than the other; AR or VR? But that doesn’t quite drill down into the differences of their use-cases, or where the separate technologies may begin to converge in the future. As Riccitiello notes, “I doubt we’re going to distinguish between them in a decade.” Rather, he believes the distinction will come from a device like Google Glass at one end, and full blown room scale VR with collision detection and cameras that can see the real world at the other end.

Riccitiello anticipates that in future, one of the things you can count on is that these headsets are not going to be tethered with multiple cables to a PC tower, like many HMDs currently require. Instead, he feels VR devices will either be powered by smartphones, whether that’s as a screen or powering an external headset and viewer; a head-mounted display with built-in tech, or through a system strapped to a belt.

Modern VR and AR headsets and use-cases are completely new to the average consumer.

The Gap Of Disappointment

Riccitiello says that right now there’s too much analysis and forecasting by analysts that depict the technologies as something fundamentally different. This is despite VR tech with those inside out cameras he’s experienced himself that “Feel an awful lot like AR”, but with the current benefit of a wider field of view.

Recalling a talk he gave at a previous conference entitled ‘The Gap Of Disappointment’, Riccitiello feels what some analysts misunderstand is how the VR and AR industries are going to initiate. At least in the West, consumer headsets like the Oculus Rift, HTC Vive and PlayStation VR only launched in late 2016. Prior to that, years had been spent sending game makers dev kits. It’s easy to forget, for those in the industry at least, that modern VR and AR headsets and use-cases are completely new to the average consumer outside of the sci-fi world.

“I still think we have yet to see a full commercial launch of a hardware platform in the VR arena, nowhere, including PlayStation,” he claims. “That doesn’t mean it’s not a great experience. But the combination of killer content with hardware that’s fast enough and gives you that untethered feeling, that hasn’t rendered into any consumers’ hands yet because it doesn’t exist.

“We’re getting close to pieces of it. I can glimpse the beauty of it all - and it will materialise - but the graph I put up in LA a year-and-a-half ago was really describing something that would probably take until 2018 or 2019 before it sees that level of maturity. And having seen lots of platform launches, I recognise complete from incomplete. I remember Dreamcast, incomplete, and I also remember PlayStation 1, very complete. So it’s a function of when it’s all going to come together. This is harder, but it’s also more breakthrough.”

Whatever the future holds for the VR and AR sectors, it seems that one thing is for certain; Unity is going to position itself right at the centre of it.

Since joining Unity as CEO in 2014, John Riccitiello has been a driving force in the successful launch of Unity 5 – the company’s next-generation multiplatform engine and development tools. Previously serving as CEO of Electronic Arts, John played a critical role in the company’s transformation into a mobile, online, and digital gaming leader, with subsequent revenue growth exceeding $1.6 billion during that time. John is also an active private investor, serving on Unity’s board since 2013 as well as Syntertainment, Telltale Games, and a few other higher-ed and non-profit boards. In addition, he was an investor and advisor to Oculus.