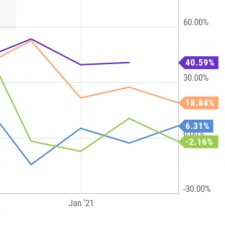 Investors buying into the video game industry should take a hard look at Unity, according to investment site, The Motley Fool.

The Unity game engine is used by developers at all levels of the games industry, from lone indies all the way up to the biggest corpos and has gained traction in the VR and AR sectors.

In an article on the subject, Travis Hoium observes that Unity's ease of use has enabled smaller developers - the kind that have adopted VR as a medium - to, "Produce an abundance of content… [which] has allowed Unity to outgrow its bigger video game rivals over the past year".

Commenting on the Quarterly YOY Growth data by YCharts (see below), Hoium observes that, "What's missing from the growth chart above is the 48% growth rate at Unity in the second quarter of 2021. Not only is the company growing faster than video game rivals, growth is accelerating".

With Unity being used not only for VR, AR and games in general, but also increasingly in other sectors in need of 3D creation such as the film, architecture and automotive industries, Hoium concludes that, "I want to own the platform developers are using to make content, not the content companies themselves. That's why Unity is the only video game stock you need today".