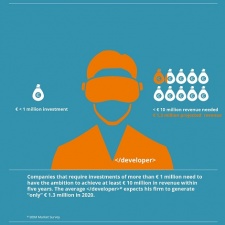 ‘VR and AR developers have to show more focus and ambition to attract the capital needed to reach their full potential.’ That’s according to the Brabant Development Agency (BOM), a Dutch economic development agency.

Their market survey report claims there is a wide discrepancy between the revenue ambitions and financing needs of developers. “This gap needs to be addressed, or it might hurt development of this young market”, warns BOM Business Developer Coen Sanderink, who led the survey.

The report states that half of the developers whose firms will require more financing in the future said they would need another round of more than €1 million. In order to raise this level of investment, companies typically need to have the ambition to achieve at least €10 million revenue within five years. However, the average developer in the survey expects his firm to generate just €1.3 million. This gap is a potential barrier to the further development of the industry, as Sanderink feels it might limit the ability of developers to raise growth capital.

“When the financials are not compelling enough, developers will have to show other reasons why investors should invest in them. Investors will be looking for potential market leaders with focus and strong client relationships because it allows them to create additional revenue models and value,” said Sanderink. “That’s why developers should outline realistic strategies to build a significant position or become a leader in a specific market segment such as training for offshore oil workers or active eSports.”

BOM conducted its survey for the first time in 2016 to examine whether VR/AR is an exaggerated hype or a business with real potential. In the second edition of Hype or Serious Business?, they surveyed 613 developers and users of VR/AR technology in the Netherlands, Belgium and Germany on a range of issues including budgets, revenue forecasts and financing needs. The survey shows that both developers and users define ‘unfamiliarity with the possibilities’ and an ‘insufficient business case’ as the main barriers to mass adoption.

“It’s always hard to predict how a new technology will be applied in your industry, which holds particularly true in this case. VR/AR involves a virtual world. You need to experience it before you can understand its potential,” Sanderink said. “VR/AR is here to stay and we see strong signs in our research that it will be serious business in 5 to 10 years. A key conclusion is that now is the time for potential users to start experimenting and explore their role in this rapidly evolving space.”

You can read more about the report here.