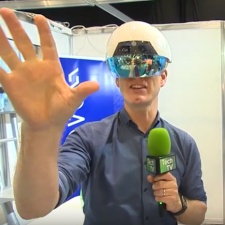 This week saw VR & AR World return to London's Docklands. Speakers included names familiar to readers of this site, including Bertie Millis and Jonathan Wagstaff, as well folk from HTC and Microsoft, and the wider industry like Ford and NASA. The event was very focussed on enterprise applications of VR and AR, with very little games content on display.

Mobile As The Future, Telcos The Enablers

There were three panel areas in the VR & AR World zone, one of which being the public Innovation Stage. Key talks included "How VR Will Be Adopted By Consumers", by Emilio Vacca of The Telegraph, and the Augmented Reality Meetup Group's "Evaluating The Full VR, AR and MR Commercial Landscape" with Steve Dann (president of the VR/AR Association). One of the most interesting panels we witnessed was Stefan Rupp (of Swisscom) and Alex Berriman (of PCCW Global) discussing "putting virtual reality competency at the centre of network capability requirements"; what was framed as a talk about the practical infrastructure needs of VR, became a more general conversation about the future of immersive platforms.

Growing the numbers of the community is the key challenge, they agreed – and mobile might be the way to go. "Compression tech and delivery platforms are advancing: the tech problems will be solved and VR will advance", claimed Berriman, but getting the installed user base is going to remain the significant hurdle. "VR won't be worth anything until you achieve a certain amount of community size", agreed Rupp. "As long as you still have bulky goggles in front of your head, it's going to be difficult [to grow the market]. Don't ask me what it's going to be! But something mobile is going to be the future."

Berriman concurred, "The good thing about mobile is the users already have the devices. Not many people have a Vive or a Rift. But the tech behind mobile will have to improve. They all need to be VR ready and 4K ready. VR could be a big step forward for the mobile industry."

People Just Expect It To Work

And AR could be where the mobile experience takes us rather than VR. "VR has a head start," said Berriman. "But the data says AR will be much, much bigger. AR will have more day-to-day uses!" But for either AR or VR to thrive on mobile, the networks need to be able to handle tons more data. Rupp said, "That's good news for the telcos! It's mobile connectivity as a commodity. People just expect it to work."

The discussion went on to look at how VR could compliment existing broadcast technologies. Stefan Rupp and Alex Berriman are mindful of how TV broadcasters are investing in VR production studios. But how does 360-video fit in with the existing infrastructure? "I'd love to see how VR compliments existing broadcasts," explained Berriman. "Horse racing for instance. Between the two-minute races, the commentator is talking through the race info; then the race starts and the commentator says, 'Now put on your headset to see the race from the finish line' or whatever. It feels like that's going to be a much more positive use of VR for the end user rather than a wholly VR experience."

He continued, "I've spoken before about snooker, boxing and other things. And VR is an opportunity for smaller or lesser-known sports to excel. It's a good chance for up and coming sports to experiment. Perhaps because they don't have an existing TV contract." But watching something like football on TV is already exciting enough; VR will have to give additional benefits. Berriman concluded, "VR is about finding those opportunities where it is valuable to capture in 360; in the horse racing example, stick a 360 camera in the stables so you can see the horses; then in Mixed Reality you could see the horse's last three race performances floating above them while they run. That adds something."

Beyond the Innovation Stage panels, elsewhere in the expo area we saw our old friends Focal Point VR and Zerolight. One particularly interesting display was co-hosted by the Leicestershire Fire Service, RIVR and VF4360. RIVR is using accurate location data and landscape telemetry to create accurate models of buildings and public spaces, and is using high resolution photo textures to then build a convincing 3D replica using Unity. This creates very authentic VR locations for training purposes – much better for the emergency services than blocky CG-rendered locations.

You can see video highlights from the event on the TechXLR8 YouTube channel.

To hear more world-class speakers share their insights on the VR, AR and MR industry, book your ticket now for the first ever VR Connects San Francisco on the 27th and 28th June.