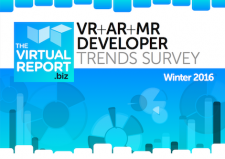 Firstly, a big thank you to everyone that took part in our first ever VR+AR+MR Developer Trends Survey – we couldn’t do this without you!

The results provide key insight into the future of this rapidly expanding sector. Overall, the VR and AR industry is positive about the medium in 2017, with more than 62 per cent predicting a positive or very positive outlook for VR this year.

Uncertain consumer interest was considered the biggest current threat generally by 60 per cent of respondents, while only 16.13 per cent had doubts due to Brexit. Adoption of the latest tech is being fuelled by indie developers working with VR and AR, but the industry is calling on government to safeguard its future.

Lack of investment in the UK - or a skills shortage - were considered the two most likely threats to VR business caused by Brexit. Government investment in tech R&D was the biggest factor, with 46 per cent of those surveyed thought would help the UK stay at the forefront of VR development.

Many of those surveyed have yet to release a product, almost 50 per cent have been operating for under two years and most have under $20,000 in development budget. Of those that disclosed their expectations, the majority expected their 2016 profits to be 5 per cent or less, although almost 34 per cent expected this to be more than 2015.

There are three key hardware players that the industry sees at the forefront of VR and AR and are therefore working with. HTC Vive with 63 per cent, was seen as important to many organisations, closely followed by Oculus Rift on 55 per cent.

The survey comprised 117 games industry professionals, more than half being developers who responded to the survey in November last year. 41 per cent of participants were European, 16 per cent British and just over a quarter were from the USA and Canada.

You can download the entire TheVirtualReport.biz VR+AR+MR Developer Trends Survey Winter 2016 FREE from your user profile area on this very site. Log in now to get 35 pages of data, insight and analysis about the global VR+AR+MR industry - completely free!