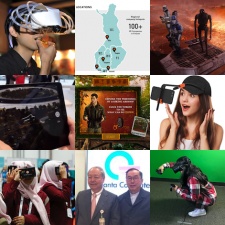 2) The Inevitability Of Augmented Reality HMDs

Forbes on AR smartglasses to replace the ubiquitous smartphone.

4) In ‘Star Wars: Secrets Of The Empire,’ Virtual Reality Finds A New Hope

Techcrunch on ILMxLAB’s success in bringing a much loved franchise into VR and LBE.

All 104 pages of the Finnish VR Association’s Industry Report.

Lab to develop and test VR games for health education and behavioral intervention in youth and young adults.

Next Reality looks into Apple’s $427 million main building that is often referred to as ‘the spaceship’.

8) Virtual Reality Could Be the New Classroom Essential – Statistics Affirm

9) Smellable VR Is Coming Whether You Want It Or Not

Engadget’s brief history of smell-o-vision asks why should VR restrict itself to just two senses.