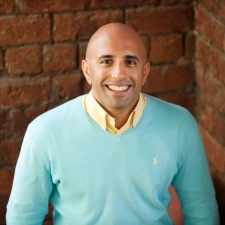 Bobby Thandi is the founder and CEO of XR Games, an award-winning game development studio founded in 2017 and led by industry veterans from Rockstar, EA, Codemasters, Sumo, Team 17 and Dubit.

Bobby Thandi is also the Executive Producer for all XR Games titles including Zombieland VR: Headshot Fever, and the award-winning Angry Birds Under Pressure VR. Which was voted by the public as a TIGA Game of the Year 2019 Finalist and awarded 'Best for Entertaining the Kids' by Forbes.

We caught up with Thandi to see which innovations in the creative industries have impressed him and how games contribute to other media.

Tell us a bit about your company

XR Games is an award-winning game development studio founded in 2017 and led by industry veterans from Rockstar, EA, Codemasters, Sumo, Team 17 and Dubit. In careers spanning two decades, we've created immersive games for some of the world's biggest brands.

What does your role entail?

As founder/CEO and executive producer, my job involves many different aspects. I attract talent to build teams, secure licences from Hollywood film studios, help win key clients re work-for-hire work, and have overall responsibility for all our titles. I'm also responsible for developing key relationships with global partners such as Sony Pictures, Facebook, Microsoft and others.

Not to mention fundraising - in December 2019, I raised £1.5m seed investment from Praetura Ventures and existing investor ACT Capital Partners. As well as participating in scale-up programs such as in August 2019, when out of 10,000 entrepreneurs being supported by NatWest, XR Games was ranked 9th on the NatWest Entrepreneur Accelerator PowerUp Index.

What do you think games can contribute to other media?

I love being in a flow state where the challenge of the game and my ability/skill are in perfect harmony. Creating games that afford this flow state experience for others is just magic. And when comparing games to entertainment such as TV, movies, music, etc - it doesn't give me the same level as satisfaction as I'm not interacting with the content.

What advice would you give to anyone looking to get into your field?

When we last hired a game designer, we received over 950 applicants. The successful candidate was not only a talented and an award-winning game designer, but she could also write, animate and draw. As such, to stand out from the crowd, try to think about what extra value you can offer to a games studio.

What innovations have impressed you in recent months?

Due to COVID-19, the need and want for games to help provide players with a social connection to others has been super evident. Games such as Among Us, Fall Guys, and Robolox being the obvious examples of social gaming. Coupled with the industry being able to continue working remotely, you can see why stock prices of games studios have been increasing!

Further, we've seen huge and rapid gains in tech adoption and the Quest 2 looks as though it'll finally take VR mainstream. Which is great to help provide folks with a sense of presence with loved ones as they're being kept separated due to Covid-19 and lockdown/travel restrictions.

What major trends do you predict in the next 12 months?

More social games and increased adoption of AR and VR. All three can help provide a sense of social presence which makes up for not being together in real life.

Brian has been working in the games industry since the mid-1990s, when he joined the legendary studio DMA Design, as a writer on the original Grand Theft Auto. Since then he's worked with major publishers, founded his own digital agency, helped numerous startups with PR, marketing, communications, narrative design, branding and making money.

Back in 2004 Brian created the Scottish Games Network, the industry body for the country's videogames sector. He also lectures at Napier University on the transformative power of interactive media on the creative industries, is a board member of Creative Edinburgh, and helps to organise games, tech and creative industries events.

In his spare time he plays videogames and is usually, proudly, at least one generation behind the cutting edge consoles.