Studying Games To Make Them 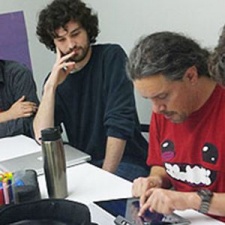 We hear about two leading games design courses and how they prepare their students for a career in games development.

Find out how you could get free student passes to VR Connects San Francisco later this month.

Mancuso told us that, “Students are exposed to everything from architecture to narrative to colour theory to statistics to game theory. It is the ultimate in a general education,” he says. “More and more industries are coming to the conclusion that the skills learned by game designers are applicable to their fields.”

However, Mancuso looks further into the future as well. “The nature of what a game is, is constantly changing - expanding into new technologies and exploiting new ways of looking at the world,” he posits. “Games have always been on the cutting edge of the computer revolution, and I don't see that changing anytime soon.”

VR studios are most in need of employees with fresh eyes and fresh ideas.

“Students here are like students everywhere in that they want to do something new and exciting,” Mateas says. “Right now the HTC Vive is probably the most popular platform, but that will change too.”

Mateas is happy to say that almost all graduates have found work in the industry. In the other programs though, some students study games to launch commercial careers in other fields. He notes, "You'll find banana slugs (the familiar name for UCSC alumni) all over the games industry, from AAA studios to funky indie art games. There has been a games program here for 11 years now, so that's a lot of alumni. Most recently, my own students have found a lot of work in VR studios. It seems like the VR studios are most in need of employees with fresh eyes and fresh ideas, and the students have done really well there.”

Studying games is a powerful tool for understanding our future as technologists and as culture.

Both professors agree that now’s the time to be studying up on game design.

“The processes and techniques in the game industry have become attractive to many endeavors that are not part of the gaming community, including Serious Games, and research into AI, UI and UX,” Manusco explains. “I expect that pure research into electronic games will become more and more important in MS, MFA and PHD programs as well.”

Mateas said, “Computers are so much a part of our lives now and computer games are and have always been at the deepest mesh point of computers and humans,” He went on to say that, “Games are a way of understanding and even predicting how we will interact with computers going into the future. I think it's very difficult to be a game designer and not also be a futurist. Studying games is a powerful tool for understanding our future as technologists and as culture.”

Up to 20 students and their tutor from any college or university can get in for free!

VR Connects joins Pocket Gamer Connects in San Francisco on 27th and 28th June, bringing together the whole VR and mobile game dev ecosystem. And up to 20 students and their tutor from any college or university can get in for free! We can offer students free passes for Day 2 (28th June) - just fill out this form or contact this email to confirm and we'll send you the link to register. If you want to come for both days, we can also give a 20% discount for a full conference student ticket.

Please note: both offers relate to students aged 18 and over.

The event features a genuine industry cross-section: from indie developers to CEOs of top multinational publishers, as well as platforms, tool-makers, investors, media, and more. We’d love to invite students to learn from the experts who’ll speak across 12 conference tracks, benefit from experiencing a large exhibition with games to play and demo, and network with the biggest names from the biggest companies.

This article was first published on PocketGamer.biz. You can read the full interviews here.

US-based Jessica Famularo writes about video games, both mobile and not-so-mobile. She used to be addicted to an MMORPG, but is proud to say she now goes outside sometimes.