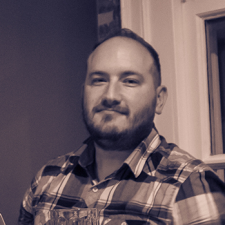 Paul Colls, Co-Founder & Creative Director at Fierce Kaiju is one of 60 world-class speakers appearing at VR Connects London 2017 on the 16-17th January 2017. To hear Colls speak in person, book your ticket now!

A: I’m the Creative Director of Fierce Kaiju. My priorities are concept development, game design and content creation. I’m the guy that will maintain the creative vision for any of our projects, as well as jumping in and getting my hands dirty. That said, with FK being a small team, we all end up getting involved in bits of everything and push our games forwards in ways that traditionally we might not be expected to.

A: This will sound horrendously clichéd, but from the moment I first experienced this new wave of VR, I genuinely felt we were at a turning point. My mind raced with ideas about new ways to play and experience exciting content, It’s seeing these ideas and new concepts develop over the coming years that gets me most excited. It’s an incredibly exciting space to be in.

A: I think it’s grown in a way that most of the major players predicted; slow and steady. We’re starting to see great content across the various devices now, and it’s encouraging to see the big companies and studios getting involved too.

A: I expect that we’ll see more ambitious VR projects in both scope and scale, more akin to traditional AAA experiences. We’ll still have fantastic new content from Indies too, of course. I also imagine that we’ll see a push for more social VR gaming experiences, but I’m hopeful for big, epic content in 2017.

A: PGC London has been a great event for networking with potential business partners and industry friends, so I always look forward to that. This year, we have VR Connects with a truly stellar lineup of speakers, whom I’m very much looking forward to hearing from, along with delivering some pearls of VR wisdom myself, of course…

Don’t miss your chance to hear Colls take part in a panel session on overcoming design challenges for VR as part of the VR University track on Day 1 at VR Connects London. The session is at 16:00 on 16th January 2017. Book your ticket now!

Paul Colls is Creative Director of the UK dev team Fierce Kaiju – currently best known for their pioneering VR title Viral - who are committed to pushing all available boundaries in VR.

Paul’s an experienced and accomplished games designer, with 16 years industry time and over 20 games under his belt, including the likes of Grand Theft Auto, Red Dead Redemption, Call of Duty and more, with much more still to come. As well as – if asked - being able to write the bible on fun, it’s innovation that most definitely flicks his switches, with a proven track record of bending new technology to the will of the designer.

Married with two kids, Paul lives in Nottinghamshire and when not beavering away on a new Fierce Kaiju title, can usually be found drinking popular culture up through a straw, or attending industry events sharing all his valuable experiences.