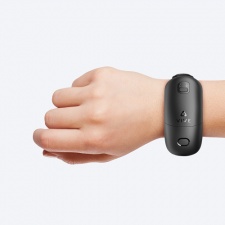 Taiwanese VR hardware manufacturer HTC has announced its new Vive Wrist Tracker, designed for use with the VIVE Focus 3 All-in-One headset. Interestingly, HTC is quick to point out that the tracker can easily be worn on the wrist or attached to objects so they can be tracked in 3D space. It’s 85% smaller than a VIVE Focus 3 controller, and 50% lighter at just 63g.

The tracker pairs with one button to the Focus 3, while the strap can be removed for cleaning or personalising with a different colour. With a four-hour constant battery life, an LED indicator shows the battery status, which can be charged via USB-C.

The Vive Wrist Tracker’s positioning and tracking abilities mean that it doesn’t just help with hand tracking, but tracking from fingertips to elbow and even predict the pose when the headset can’t see the tracker. In a blog post, Shen Ye - Senior Director, Global Head of Hardware Products, HTC - claims that it makes tracking hand-held objects even easier and is capable of, 'Effectively converting 3dof controllers to 6dof".

HTC will release CAD files for mounting the Wrist Tracker onto objects.

The Vive Wrist Tracker works in a similar way to VIVE Focus 3’s controller. The LEDs are picked up directly by the VIVE Focus 3 tracking cameras to help achieve standalone tracking. Ye explained that, "When user wears the tracker on the wrist, we can predict the tracker’s motion trajectories even when the tracker is out of camera’s view in a while by using high-frequency IMU data and an advanced kinematic model. With this technology, we can predict their hand position when the hands leave the tracking camera view".

The HTC Vive Wrist Tracker launches first in the USA early this year, with other territories to follow, priced at $129 (£119).