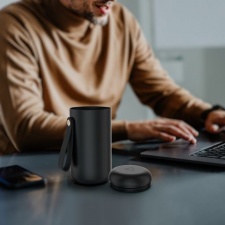 What is HTC Vive up to now, we ask ourselves? Just hours ago, the Taiwanese trailblazer shared its first Tweets for a week in a one-two combo of words and pictures.

When a hardware manufacturer tells us to 'save the date', that usually means one thing - new hardware. We might be reading too much into this, but the capitalisation on the graphic suggests we might be looking at something called the 'Vive Flow'. Of course, that might not be a proper noun and it's just a typo after all.

But the second Tweet is when HTC shared a picture that's little more than a teaser, but definitely puts us in mind of hardware again. There's a guy working on a laptop, mobile phone to the side and between the two has been photoshopped… something?

It's about six inches tall, roughly cylindrical, presumably hollow, with a soft handle and a lid marked with the Vive logo sitting on the desktop beside it. It looks a little like a travel mug or… a chunky glasses case.

Like you'd use to transport a pair of folding smartglasses...

As we engaged in a bout of Google Fu, we followed a trail from Upload VR that led us to details of a trademark for 'VIVE FLOW' filed by HTC Corporation last month (August 2021).

The trademark has been assigned an international class of 'Games and playthings', which puts us in mind more of VR than AR, but Class 028 also mentions, 'Decorations for Christmas trees', so unless HTC is 'branching' out this festive season, we shouldn't read too much into that.

We will 'go out on a limb' however and speculate that HTC will announce a new HMD called the Vive Flow on October 14th.

With one standalone and two PC VR headsets already in the Vive range, it might just be a more affordable entry point, but let's go back to that picture from Twitter. It's probably no coincidence that the mystery object was presented between a laptop and a mobile phone. If that is a carry case, then it's too small for VR headsets as we know them, but just about right for some AR glasses powered by external hardware.

We contacted HTC Vive to find out more and a spokesperson told us that, "We will provide further details closer to the time and ahead of the official announcement".

We'll bring you an update just as soon as we get new information.