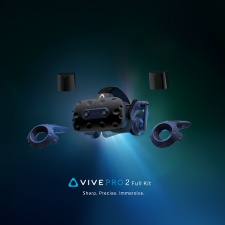 HTC launched its latest consumer headset - Vive Pro 2 - in June, but was only of note for consumers that already owned the necessary ancillary hardware such as base stations and controllers, because they weren't included.

The Taiwanese manufacturer has now confirmed that a Pro 2 Full Kit is on the way, including all the hardware the user needs to get started in VR. It's available to pre-order now in the States, with Europe, the Middle East and Africa to follow from September 23rd. Pre-orders end in EMEA on October 14th, when the hardware will be available for purchase and begin shipping to customers.

Customers that pre-order will also receive a £50 gift voucher to spend in the store where they purchased the headset - including Vive.com.

The 5K headset is right at the top of the specs table not only thanks to its better than UHD display with RGB sub-pixels, but it also features a 120-degree Field of View (FoV) and a 120Hz refresh rate.