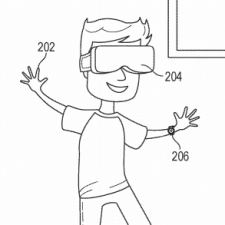 As we reported way back in 2016, Apple CEO Tim Cook has long been vocal about his belief that AR will eclipse VR and will be the, “Larger of the two, probably by far". But that doesn't mean Cupertino has no interest in VR, as US patent no 11,107,282 B1 proves.

That in itself would be interesting enough for us to report, but there's an extra wrinkle that makes this patent even more noteworthy; not only will users be able to purchase apps from within VR, but the apps suggested will vary based on biometric readings.

The idea is that the store will assess data gathered by biometric sensors in the HMD to measure one or more of the user's changes in physiological states including heart rate, physical activity level, eye movements and facial expressions. The store will then recommend relevant apps to purchase, based on data from the behaviour of other users.

What's in a name?

And one last little detail that we spotted in an annotation on the diagrams in the patent. Just when the world is coming to terms with the differences between virtual reality and augmented reality, Apple decides to throw a grenade in the room with something it wants to call 'augmented virtuality'. We think that's nothing more than another term for mixed reality, but then, Microsoft insists on using mixed reality where everyone else sticks with virtual reality, so who knows any more?