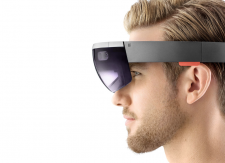 Apple has yet to announce the release of any VR or AR hardware, but CEO Tim Cook has no doubt that Augmented Reality will be the bigger commercial format. When asked about Apple’s plans for virtual storytelling in an interview with Robin Roberts for Good Morning America, Cook says that, “There’s Virtual Reality, and there’s Augmented Reality. Both of these are incredibly interesting.” He went on to observe that AR is going to be the, “larger of the two, probably by far. There’s lots of really cool things there.”

VR’s blowing up right now because it’s here, but AR could blow it away when it comes to the party. VR is forecast to become a $30 billion industry by 2020. That’s massive, but it’s still only a third of AR’s projected $90 billion, according to a report by California-based VR/AR M&A adviser Digi-Capital. They say that “VR could be big, and AR/MR could be bigger and take longer.”

As console firms Microsoft and Sony square up against each other once more - this time with HoloLens and PS VR - it looks like they’ll be joined by mainstream big brands Apple and Facebook backing AR and VR respectively. And Google? We know about its forthcoming Daydream VR platform, but you can bet your bottom dollar the megacorp hasn’t forgotten the lessons learned about AR with the ill-fated Google Glass.

Why The Buzz About VR Right Now?

Many early adopters already own either headset dev kits or premium consumer hardware. They know what VR’s capable of because they’ve already experienced it. And thanks to the affordability of Google Cardboard, the VR experience has already reached the mainstream. For a tiny outlay, interested consumers can try VR – or indulge their kids’ curiosity for pocket money prices. AR however, remains an intangible prospect for now.

Additionally, those early adopters, technophiles and gadget geeks are likely to be gamers; people who love nothing more than immersing themselves in other worlds. And what could be more immersive than a VR headset that blocks out the real one?

But what if you’re not a gamer? Incredible as it seems to us, not everybody wants to shut out the noise and lose themselves in a game. It’s those people Cook’s thinking of when he says, “Virtual Reality encloses and immerses the person, but probably has a lower commercial interest over time. Less people will be interested in that”.

Even the most hardcore gamer has to concede that VR is not something you can use as you go about your daily life. You can’t drive to work, pick up groceries or walk the dog in VR. But you can do all those things and more in AR. In fact, if the headsets are comfortable enough, there’s no reason you couldn’t spend every waking moment in AR.

With a huge diversity of potential applications for the technology, you could view location-based information such as flash sales in the high street as you watch a dragon fly overhead. As those clever guys at Digi-Capital put it, “Where VR is entertainment plus apps, AR is apps plus entertainment.”

Digi-Capital are so bullish about the potential for the technology they reckon that, “In the long run, AR/MR could replace the smartphone in your pocket.” Suddenly it makes sense that Tim Cook, CEO of Apple with its sell-out iPhone range, is backing AR for the win.