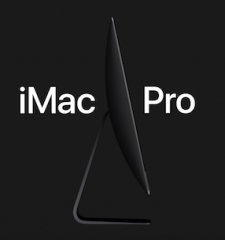 Fitted into a matte space gray body (rather than the silver aluminium of old) comes a computer capable of real-time 3D rendering, video editing and importantly, Virtual Reality content design.

Equipped with an 8-Core, 3.2GHz Intel Xeon W processor (overclocked to 4.2GHz), which can be configured up to 18-Cores, Radeon Pro Vega 56 graphics processor with 8GB of HBM2 memory and 32GB RAM, configurable to 128GB – the iMac Pro is a beastly machine.

You can read our report on Apple's WWDC announcement that VR would be coming to Mac here.

The iMac Pro is available to order from the Apple Store, online or in-store.