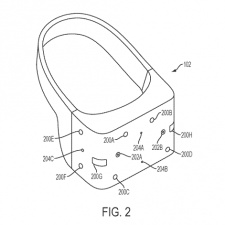 We're the first to take the revelations contained within patents with a huge pinch of salt, but we had to dive in when Sony published a patent titled 'Head Mounted Display' today. It's 24 pages of tightly packed and repetitive embodiments, claims and descriptions. Don't worry - we read it so you don't have to.

Before we go any further, check out the first details about PS VR 2 - or NG VR as Sony refers to it - from a mini developer summit last week if you haven't already caught up with the news. Done? Good.

We were generally impressed with the spec, with one exception - it isn't wireless. Which as it just so happens is one reason that today's patent caught our attention. Way down in clause [0063] we found the information that the HMD's 'Connection to computer… can be wired or wireless'. We're intrigued!

Patents are always a bit of a catch-all, but that same clause goes on to define the computer as, 'Any general or special purpose computer known in the art, including but not limited to, a gaming console, personal computer, laptop, tablet computer, mobile device, cellular phone, tablet, thin client, set-top box, media streaming device, etc'.

Now, gaming console obviously refers to a PlayStation and we can understand how a PC or laptop could run PS VR 2 - please make it so, dear Sony - but set top boxes? Streamers?

The key two words are 'thin client', which clause [0070] describes as being, 'In communication over a network with a cloud gaming provider'. Cloud. Gaming. Just this week, Nvidia demoed VR running remotely via Google Cloud and CloudXR at SIGGRAPH. Has Sony been drinking the same Kool-Aid?

The following clause in the patent expands on this saying, 'The computer... may be a local network device, such as a router, that does not otherwise perform video game processing, but facilitates passage network traffic'.

Of course, Sony already has experience streaming console games via the PlayStation Now service, so this would seem a logical progression. We're beguiled!

Clause [0071] goes on to repeat that, 'The connections to the network by the HMD... may be wired or wireless'. Stick with the patent for another riotous 37 clauses and [0108] offers up the tempting nugget of information that, 'A WiFi module... is included for enabling connection to the Internet via wireless networking technologies. Also, the head-mounted display... includes a Bluetooth module... for enabling wireless connection to other devices'.

So there we have it - according to official documentation published by Sony, PS VR 2 is wireless, powered by the cloud and will run using nothing more than your router. No, we don't believe a word of it either, but this patent certainly proves that Sony is thinking along these lines for some point in the future...