VR development cuts the cord and heads to the cloud 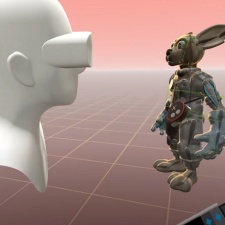 Using VR in the cloud? It'll never happen, they said - and yet here we are...

At this week's SIGGRAPH event, Nvidia demonstrated how Masterpiece Studio Pro running on Google Cloud with CloudXR accelerates character creation in VR. And with the use of a standalone headset such as the HTC Vive Focus 3, artists will have the freedom to create from virtually anywhere - as long as there's a good internet connection.

Masterpiece Studio Pro is a fully immersive 3D creation pipeline that simplifies the character design process by enabling artists to work on a character face-to-face in VR, providing a more intuitive experience. Users can work on characters at any scale and use familiar tools and hand gestures to sculpt and pose models — just like they would with clay figures in real life. And drawing bones in position couldn’t be easier, because artists can reach right into the limbs of the creature to place them.

And much like Nvidia's established GeForce Now game streaming service, developers can rent a GPU on a Google Cloud Virtual Workstation, powered by NVIDIA RTX.

“We’re excited to show how complex creative workflows and high-quality graphics come together in the ultimate immersive experience — all running in the cloud,” said Daniel O’Brien, general manager at HTC Americas. “NVIDIA CloudXR and the VIVE Focus 3 provide a high quality experience to immerse artists in a seamless streaming experience.”

With Masterpiece Studio Pro running on Google Cloud, and streaming with NVIDIA CloudXR, users can enhance the workflow of creating characters in an immersive environment — one that’s more intuitive and productive than before.

Two Out Of Three nVidia Edge Winners Are VR Projects