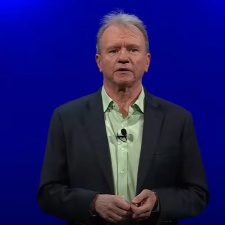 Everybody knew that PS VR 2 was coming, but we didn't expect more details to be unveiled at this year's underwhelming CES 2022! Sony done know how to blow up a party, y'all!

I think we can all agree to move straight past the ill-fated Tom Holland movie preview for Uncharted and focus on what Jim Ryan, President and CEO at Sony Interactive Entertainment had to say. (Other than bigging up PS5 sales, when we all know at least one person that would still give up a kidney to buy one…)

So there are 17 PlayStation Studios at the moment - and we also look forward to seeing them shine… until Sony inexplicably shuts them down, that is. (See London Heist etc) But at least Jim promises that, "We're going to lead the way with exploring new technology that unlocks new entertainment experiences".

But let's listen up when the green-collared suit says that, "Virtual reality is central to that philosophy." He went on to say that, "Nothing elicits emotion quite like the VR medium", followed by platitudes about providing the ultimate experience for players. Snooze, Jim - we've all been around for more than one generational shift now', but you can still capture our hearts with more of this VR flirtation…

But still, at least Ryan can now announce a revolutionary name for the PlayStation VR 2! It's… PlayStation VR 2. Well, look - it's better than the whole mess that Xbox is in now, at least. And continuing that most Japanese of logical nomenclature, the PS VR's Dualsense VR controllers are called… Sense Controllers. Amazing! (We take the piss, but they really could actually be brilliant.)

Ryan assured us that PS VR 2 will deliver a, 'Truly next gen experience' - but of course he would! The presentation also promised to, "Bring together the power of technology with the creativity of developers" in a move that was eerily reminiscent of Meta's recent shout out to their ex - sorry, development community.

But when he gets to the point, we at least discover that Ryan promises a "Visually best-in-class experience" of 4K HDR with foveated rendering and 110-degree field of view. Which all sounded really impressive until the controllers appeared like giant brain stems onscreen behind him. Don't worry - it's just us and late night conference fever - they really will be superb!

The presentation closes with a showreel for Horizon Call of the Mountain from Guerilla Games and Firesprite Games; impressive whether you're a fan of the original open-world or not.