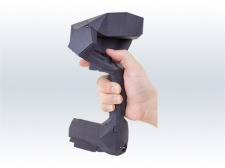 Tactical Haptics will pilot its new haptic controllers as part of an IMAX project to bring engaging experiences to VR Centres around the world.

The controller features sliding bars in the palm-grip which can apply forces replicating the feeling of having an object moving within your hand. After receiving a Small Business Innovation Research (SBIR) grant, sponsored by the National Science Foundation (NSF), Tactical Haptics set about creating a more robust and streamlined version of the controller compared to previous models such as its unsuccessful Kickstarter incarnation.

Paired with the Justice League: An IMAX VR Exclusive experience, both companies aim to immerse users into feeling as though they are swinging Wonder Woman’s sword, or the recoil from Cyborg’s mini-cannons. The controller is compatible with both the HTC Vive and Oculus Rift headsets.

The Justice League: An IMAX VR Exclusive experience is available at IMAX VR Centres internationally, but the haptic controllers will only be available at the LA Centre initially.

We’ll find out more about the controllers at the Smart Haptics conference in San Diego on Wednesday.