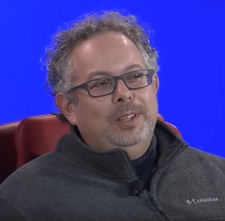 Rony Abovitz, CEO of secretive Florida start-up, Magic Leap, has revealed the company plans to release a series of headsets at a range of price points. In an onstage interview at Recode’s Code Media conference, Abovitz said, “We’re trying to establish certain tiers — we’re not going to be a single-product company over time”.

Revealed shortly before Christmas last year, Abovitz describes the Magic Leap One as a ‘creator edition’ headset adding that, “We will have a product line in that price point probably for the company’s history, and we’ll probably have some above and we’ll have some below”. He clarified the distinction between these models saying, “We’ll have even higher-end for hyperpro and then we’ll have wide mass market”.

Magic Leap One will ship this year.

While yet to confirm pricing for Magic Leap One Abovitz said, “It’s a premium computer, so I would think of it that way”. He also explained that, “Higher-end mobile phone to higher-end tablet zone is probably our floor”. That could mean a price point in the region of $1,000 in line with Apple’s iPhone X. That’s hardly “Being priced for affordability”,  as Abovitz stated at the eMerge Americas investor conference, but it is considerably cheaper than Microsoft’s $3,000 HoloLens.

The price will be revealed ‘day and date’ with the launch.

Abovitz takes exception to Magic Leap’s technology being described as Augmented Reality, reasoning that the general public now equates it with see-through stickers on smartphones.

Explaining why their technology is different he explained, “Your eye and brain evolved for millions of years. The physics of how light in the universe works with your biology… that’s set. Let’s not screw that up!” He went on to add that, “We want to talk to visual cortex in a biologically friendly way”.

Addressing complaints that December’s reveal didn’t include any pass-through footage Abovitz said, “We did ‘shot through Magic Leap’ tech videos and it’s a little bit tricky because you need to experience it directly”.

He elaborated further saying, “Think about building a computer where your brain is the monitor so you have to directly experience it and filming that automatically makes that not the experience any more. Showing that in video is very tricky because it’s not present”.

You can watch the full interview: