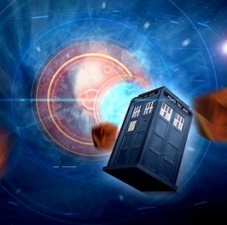 BBC Taster, a hub for experimental and unique experiences, has launched Doctor Who Time Vortex VR.

Originally released as a 360 video in May, the VR reboot aims to push the boundaries of WebVR, particularly for smartphones. Available to play on VR devices (Vive, Daydream, Gear VR), as well as mobile and desktop, the experience features new levels and obstacles to overcome, all during the show’s iconic opening title sequence. Gameplay is controlled by the player physically moving around, with the ability to face backwards in time by looking backwards.

Digital Producer at BBC Wales, Ian Richardson said, “The Doctor Who brand has always played with big concepts, and has always innovated both on screen and digitally. The show has a wealth of iconic locations and characters… and with its broad audience appeal, and rich history of online gaming, it felt like the perfect brand to deliver an innovative gaming experience in 360 and VR, and Taster felt like the perfect companion to deliver this experience.”

The Doctor Who Time Vortex VR experience is available on BBC Taster for a limited 3-month period, December until March.