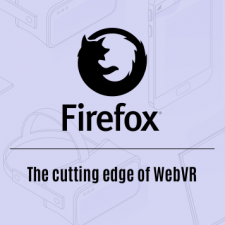 The latest update for Firefox includes support for WebVR for all Windows users with an HTC VIVE or Oculus Rift headset in Firefox 55. WebVR has been available on Firefox for eight months, hidden behind a user preference in the Nightly edition, but it will now be enabled by default under the new update.

In an article on Medium, Sean White, SVP, Emerging Technologies at Mozilla said, “VR on the web has a real shot at becoming a mainstream technology today,” citing improvements in web capabilities, online gaming and hardware affordability as the main reasons.

Nate Mitchell, Oculus Co-founder and Head of Rift said, “We believe WebVR will be a key factor in the progress toward mass adoption of VR and a powerful channel for creators seeking the broadest distribution. Through our work with Mozilla, we’re making it even easier for Oculus Rift owners to have access to a growing collection of amazing WebVR content, whether it be the countless immersive experiences already available or an optimized 2D browsing experience.”

Rikard Steiber, President Viveport and SVP Virtual Reality at HTC said, “VR will change the world as we know it and WebVR will be a great platform for a new generation of immersive cross-platform experiences for the HTC Vive and others. We look forward to continuing the work with Mozilla and our Vive developer community to deliver mindblowing WebVR experiences.”

Mozilla invites content developers to use A-Frame, a framework used over 10 million times a month, or one of the other amazing web engines and frameworks, such as React VR, to target WebVR and develop VR for every major device.

More browsers are set to join Firefox, with Microsoft next to add WebVR support.