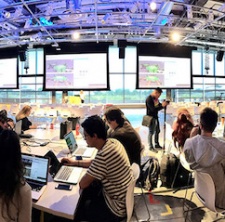 Oculus has announced the 14 VR projects that have been selected for its second year of the Oculus Launch Pad program – designed to propel promising VR content creators from diverse backgrounds.

Aspiring developers will have access to networking, training, workshops, feedback and mentorship provided by Oculus. Oculus intends to accelerate the development of unique VR work; included in this year’s group are immersive documentaries, narrative-driven films, games and educational simulations.

Avaloki – A coming-of-age story of two siblings in search of their exiled father.

Being Henry – This first-person documentary lets you see the world through Henry’s eyes, a man who suffered a stroke that left him paralysed.

Chrysalis – A VR adventure and escape game in which the player becomes trapped inside a cocoon-like monster while travelling at sea.

Conjure Strike – Multiplayer-focused combat in which teams of two battle it out as characters with unique abilities.

Danciverse – A series of story-centric adventure games where the player can travel the galaxy and save alien planets through the power of dance.

Home with America – This live-action VR film uses the tech to reunite undocumented immigrants with their families, hometowns and home cultures.

I Am A Man: VR Experience – An interactive VR experience set during the African-American Civil Rights Movement.

NeuroExplorer VR – An educational tool for exploring the development of the human brain from brainstem to neocortex and stimulation.

Noodles – Noodles is an interactive short film about a little girl who celebrates her birthday by going out to eat noodles with her father.

Shadows of Society – A VR documentary about the ‘triumphs and challenges of those whose voice go unheard’.

Study of a Commodity VR – This interactive VR experience encourages players to push aside modern distractions in favour of a different perspective on reality.

Synesthesia – An experience that uses auditory and visual senses to react and portray a 3D environment in real-time.

Where Angels Meet – This VR narrative experience lets users follow the life of a young man named Marcus from a uniquely angelic perspective.

Applications for Oculus Launch Pad 2018 will open in March.