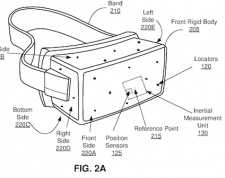 The patent details a new VR headset model featuring a curved screen, as first reported by German tech site, LetsGoDigital. The curved screen is configured to output light corrected for optical distortion, where in conventional Oculus models, additional optical components (such as lenses) have be to be fitted to correct optical irregularity. The cylindrically curved display panel will also include a fiber optic taper, allowing for greater Field Of View.

This tech may form the basis for an updated Rift or it could be used in a separate model, but it’s unlikely to feature in the recently announced standalone Go headset, or the more powerful all-in-one Santa Cruz hardware, both expected next year.