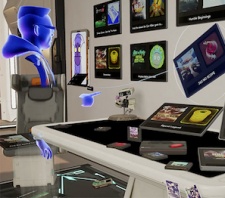 Expected to arrive in beta this Wednesday, Oculus is edging closer to releasing the largest update so far, dubbed Rift Core 2.0.

Rift Core 2.0 includes new looks for Oculus Home, the Oculus desktop app and the beta release of Dash, a refinement of the current UI, bringing all existing menus into one accessible central hub. Dash will run as an overlay, allowing users to switch between apps, friends list and library without leaving their current activity.

First revealed at October’s Connect 4 event, the update is designed to take advantage of Oculus Touch, with the Home running Touch-native. Functionality for gamepads will remain, but Oculus has stated that to take full advantage of the features in Rift Core 2.0, people should ‘use Touch’. Particular customisation of your Home will require the Touch, and cannot be done with a regular gamepad.

The new update will be released as a free beta for all users this Wednesday.