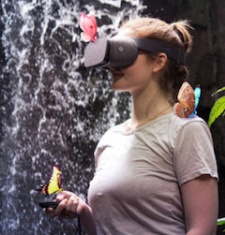 Flutter VR focuses on immersing the player in a meditative and relaxing environment by putting them in the shoes of a wildlife researcher. The game features dynamic day-to-night cycles, real-life butterfly and moth species displayed in 3D and full body movement via the Daydream’s controller.

Runaway is targeting female gamers and overlooked groups, such as non-VR users, disabled people and people with limited mobility, with the launch of Flutter VR. The studio tested the game in conjunction with rehabilitation organisation, Southern Rehab, to reduce motion sickness and instead increase the feeling of relaxation through the use of a soundtrack evoking Autonomous Sensory Meridian Response (ASMR).

Creative Director Emma Johansson said, “Flutter VR is unapologetically a game made for women. As a studio team, this project design, coupled with our past experiences has honed our focus on ensuring we make VR experiences that are accessible to all and have a positive effect on players.” You can read more of Johannson’s thoughts on designing VR with accessibility to the fore in our special feature.

Flutter VR will be available to download from the Google Play Store from 11th December.