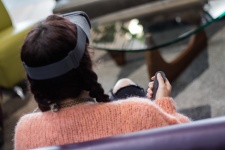 Runaway Play is a New Zealand-based VR studio that specialises in games with a positive effect on player wellbeing. Their work is inclusive of users with physical or mental health issues, breaking new ground and designing VR with accessibility as a focus.

Product Owner/Art Director, Emma Johansson and head of Quality Assurance, Bryce Holtshousen, talk about their learnings in accessibility for XR and how early user testing can broaden a game’s potential audience by making sure it’s truly inclusive.

VR’s reliance on heavy headsets and physical movement have remained a challenge.

As Virtual Reality moves further into the mainstream, studios are now attempting to tackle both the potential opportunities and the challenges it presents.

People living with mental or physical disabilities are widely lauded as possible beneficiaries of the technology; a societal group traditionally overlooked by the industry. They can benefit from in-game movement, experiencing new environments and even taking part in rehabilitative VR programmes.

But designing experiences that can accommodate such unique needs isn’t straightforward. Although accessibility guidelines have existed in the games industry for some two decades, VR’s reliance on heavy headsets and physical movement have remained a challenge.

Some developers are making headway however, by working collaboratively with a variety of niche audience players who will eventually be able to access the games.

Runaway is a mobile games development company based in Dunedin, New Zealand. Their three existing games - Flutter: Butterfly Sanctuary, Flutter: Starlight, and Splash: Ocean Sanctuary - are all based on the theme of raising and collecting creatures in a relaxing space.

Runaway’s offering has always been slightly different to the norm, with a focus on creating genuine connections with the natural world to bring joy to players. The typical audience for these casual games benefit from the calm and relaxing window to the world, which gave the Runaway team a base of evidence to work with when it came to the emotional effects of game experience through design.

We wanted to make something people could play even if they couldn’t get out into nature themselves.

With two new titles in the works for 2018, one segment of the 20-strong team has been creating a VR title for Daydream by Google, due for release next week. Product Owner/Art Director, Emma Johansson, explained the studio’s learnings of how much easier it is to consider accessibility during the design stage. The sooner they can account for constraints of any kind (particularly mobility), the better they can address them.

"Given our existing titles, we had a backlog of feedback of the positive effects of our games for those players living with physical disabilities and mental ill-health. So while the VR audience is vast, we did keep in mind people with accessibility issues from the start, as part of a wider demographic. We wanted to make something people could play even if they couldn’t get out into nature themselves. We decided that we wanted our players to be able to experience the game while sitting comfortably in a couch or laying in bed.”

The challenges lay at the very core of how the gameplay is designed, the interface and motion controls, as well as how the design would make a person feel, both emotionally and physically.

The team set about designing new ways to control the VR experience with one hand, so that players with limited ability could still move through the environment. The Daydream controller, with its simple three degrees of freedom, actually made it more accessible for people with less hand and arm movement. So the foundation was there in the hardware, before the design began.

There have of course, been trade-offs with traditional design in order to account for accessibility. However the Runaway VR team don’t believe that the generic gameplay mechanics that require movement are necessarily vital to the experience. They’re certainly not important enough to justify forcing them on players at the risk of excluding an audience.

Sensory issues can be triggered by VR sounds and movement as much as they are in the real world.

Once the physical barriers were overcome, there remained the issue of of managing stress and overstimulation. Head of Quality Assurance, Bryce Holtshousen, explained that reducing motion sickness concerns was particularly important for players in wheelchairs who can suffer travel sickness.

Equally important were the anxiety levels for players on the Autism spectrum for example. Sensory issues can be triggered by VR sounds and movement as much as they are in the real world. Again, here, the team had existing experience in working with audio and sensory themes such as ASMR, using ambient sounds to trigger feelings of relaxation and wellbeing.

"From the beginning, we aimed to produce a VR experience that was widely accessible. Discovering how well our game worked for people with disabilities came from a good opportunity during our user-testing, which we have a strong focus on.

"We’re lucky enough to have a good relationship with Southern Rehab, a company that helps people get back into the workforce after injuries. The Southern Rehab team were interested in seeing how a player on the higher end of the disability scale would be able to handle the game and what their impressions would be. We jumped at the opportunity to research it with them, welcoming their clients into the studio to test the VR design as it progressed and give us crucial feedback.”

Accessibility in VR design is about avoiding mismatch between a player’s abilities and the requirements of the gameplay.

Ultimately, Johansson believes that the lessons for accessibility in VR come down to including people with barriers to play at the early design stage, to help create and test experiences before you finalise them.

"Accessibility in VR design is really about avoiding unnecessary mismatch between a player’s abilities and the requirements of the gameplay. So we have to ask ourselves how can we build an experience that we can give to anyone regardless of their ability, confident that they can experience it and enjoy it to its fullest. Because it’s very easy as developers to design for the real-world experience that we are personally accustomed to.”

A non-threatening introduction to VR for everyone. That’s exactly what the industry needs.

A Reliable Place For Positivity

Holtshousen is clear that Runaway will take its learnings about accessibility into all game design projects in the future. "It was really encouraging to see how well the Daydream controller worked for someone with limited movement, and how much joy it bought them to be able to experience moving around in nature through VR. One tester in particular was almost entirely paralysed, with very limited mobility in her hands. She felt that being able to simply use her thumb to control all the in-game actions and movement was a massive bonus.”

As Daydream becomes more accessible, Johansson said that Runaway would love to see it used in rehabilitative settings like hospitals and care homes. “Our VR title will be a reliable place for positivity, so it holds additional potential for the elderly, people on sick leave, pregnant women and a range of other audiences.

“But more than that, the process of designing VR with accessibility in mind has delivered a VR experience of meditative escapism that offers a non-threatening introduction to VR for everyone. As we try to move this technology towards mainstream adoption, that’s exactly what the industry needs."