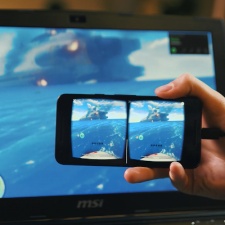 Ambitious Poilish company, Riftcat, has released software that it claims, ‘Turns your phone into an HTC Vive headset’.

VRidge gives mobile VR headsets the capability to run PC VR games using a desktop and mobile application combo. When both apps are connected, the computer will recognise the phone as an HTC Vive headset.

The communication between applications happens through USB cable or WiFi connection. VRidge sends the image from the computer to the phone as a high quality video stream with the lowest possible latency. The phone sends back the head rotation data to enable head movement for the user.

Using any mobile VR headset such as Google Cardboard, the user’s smartphone can act as a PC VR headset, supporting 3D stereoscopic view and head movements. The software is compatible with OpenVR standard and any game that doesn’t rely on hand controllers will be playable.