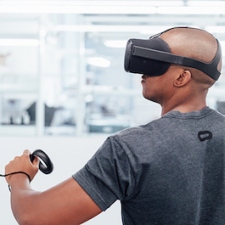 Oculus will release its standalone Santa Cruz VR headset next year, it was announced by CEO Mark Zuckerberg at the Oculus Connect 4 event.

Saying that, “Inside-out tracking is key to unlocking new experiences”, he pledged that Oculus would put, “Santa Cruz in your hands and the hands of developers in the next year”.

With its 6DoF controllers, the CEO claimed Santa Cruz would be, “The first standalone headset with inside-out tracking and fully tracked controllers”.

VP VR, Hugo Barra, went on to explain that the Santa Cruz project was started to answer one question; “Could we deliver Rift without a PC?” Oculus first showed the prototype hardware at last year's Oculus Conn3ct. This high-end standalone headset is intended to sit in the range between the newly-announced Oculus Go and the Oculus Rift.

The new HMD will be accompanied by new controllers to match the, “Overwhelming sense of freedom” of VR without a tether to an external PC. The same team that developed Oculus Touch has build upon the same tracking technology to produce, “An amazing controller”.

Complete with touchpads, grip buttons, and triggers, Barra said that the, “Ergonomics make the controllers disappear in your hands”.

The controllers look a little like upside-down Touch controllers because the tracking rings have been moved above the fist to work with the Santa Cruz’s internal tracking. The headset itself houses four ‘ultralight’ angle sensors that are placed near the edges to maximise the volume of tracked area and reduce the risk of occlusion.

Barra also introduced the audience to the Santa Cruz’s mascot, Bogo and promised we will see more of him.