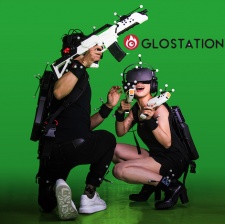 Alongside this, the company also announced that it would partner with IMAX to license its Glostation technology platform – with the first to open in the IMAX VR Centre in Los Angeles.

The LA location will feature Glo’s Deadwood Mansion zombie VR experience first, before adding more experiences down the road. Acting as an escape room in VR, Glo’s founder, Steve Zhao claims it is the, “First hyper-reality escape room” experience on offer. Players work together in hyper reality to complete objectives and escape the undead mansion, home to a deranged doctor accused of illegal experiments. The experience will last 30 minutes, however the booking clocks in at 60 minutes to include setup and tutorial.

Zhao said, “Now, with this new investment, we will be able to scale our proprietary free-roaming VR system GloStation to cities globally. We’re delighted to be working with IMAX to introduce our experience to their world-class VR centres.”

Reception to the Deadwood Mansion experience has been positive, according to Chief Business Development Officer at IMAX, Rob Lister. who said, “Customer feedback on the Deadwood Mansion VR experience at our centre in Los Angeles has been fantastic, and we look forward to working with Glo Inc. to bring GloStation to other IMAX VR Centres around the world.”

Glo currently has operations in Hong Kong and will soon operate from the US. Deadwood Mansion is available to experience using GloStation kit in the IMAX VR Centre LA.