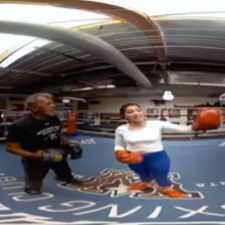 The Female Planet, a new VR video series from Google and Surround Vision, makes it possible to get a closer look at the daily lives of some truly inspiring women by partnering with five extraordinary women with careers in science, technology, sports and the arts who share their own personal and professional experiences.

Follow in their footsteps as they take you through their day-to-day routines. You’ll be able to glimpse inside their workplaces, hear first-hand why they chose the paths they’re on now, and what pushed them to keep moving forward.

Each episode features a different female leader, such as Tiera Fletcher, a Boeing aerospace engineer working on the NASA mission to Mars or Inna Braverman, an entrepreneur turning wave power into green energy.

In the first episode, Golden Globe winner Gina Rodriguez of TV’s Jane the Virgin talks about how her father’s boxing lessons and her mom’s strength gave her the courage to only accept roles that empower women. She also takes you on the set of Season 4 of Jane the Virgin as she explains how the role of Jane is helping to bust stereotypes.

The Female Planet series was shot by Surround Vision in stereoscopic 3D with the new YI HALO camera using Google’s Jump technology to truly immerse the viewer in the life of each leader.

Daydream View or Cardboard users can check out the first episode on Google’s YouTube channel, with more episodes coming soon.

There will be further Daydream and Jump productions later this autumn.