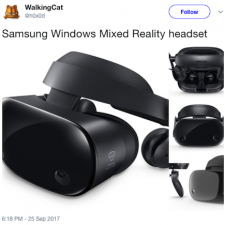 A listing for the hardware was spotted on the Microsoft store by Redditor /u/VolcanoHoliday for a, 'Samsung Odyssey Windows Mixed Reality Headset with Motion Controllers' priced at $499.00 to be released on 6th November 2017. The listing pictures match those below as you can see on this image.

The specs detail a 2880 x 1600 resolution using OLED display with a field of view up to 110˚. OLED screens should mean the Odyssey has a sharper image than any of the other WMR headsets from other manufacturers that use older LED technology. That, combined with the integrated earphones makes Samsung's offering worth the additional $49-$99 over the alternatives.

The page has now been removed, but you can still go Wayback to read the text.

Rumours have long been circulating about a new VR headset from Samsung to reach the market alongside its existing Gear VR. Two snippets of information surfaced in the last few days that when combined suggest the South Korean company is preparing to release a higher end HMD and that it could be Samsung’s take on Microsoft’s Windows Mixed Reality hardware.

The pictures clearly show the Samsung brand name on the rear, with a legend reading ‘Windows Mixed Reality’ on the side. The overall layout resembles the previously seen WMR headsets from the likes of Lenovo and Dell, with a halo design and two front-facing cameras. The pictured controllers closely resemble Microsoft’s, but with more curvaceous ergonomics.

An interesting sidenote that adds credibility to the story is that the pictures show integral earphones by AKG, which is part of the Harman group of companies that Samsung acquired last November.

Still, even the original poster says, “There's no source! I take no responsibilities! Take with a grain of salt!”

Just three days later, on the 28th September, Samsung filed an application with the US Federal Communications Commission (FCC) for ‘HMD Odyssey Controller Right’. There’s little else to be gleaned from the application, but those four little words do give us some clues as to what we’re looking at.

It’s unlikely that Samsung would have filed this application with the FCC were it not preparing to release the hardware.

While neither nugget of 'news' is confirmed, they do make a case for the imminent release of a Samsung WMR when considered together.

We might not have long to wait to find out for sure, since Microsoft will present an overview of its Mixed Reality strategy tomorrow, ahead of the Windows 10 Fall Creators Update on the 17th – and the accompanying release of the first of the WMR devices from Lenovo, Dell and HP.

You can read more about WMR hardware from other manufacturers, how much they’ll cost and when they’ll be released in this earlier article.