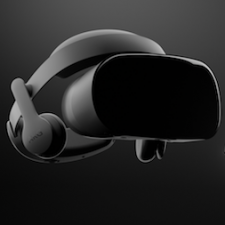 Alanna Cotton, Vice President and General Manager at Samsung Electronics America said, “When we began designing and engineering the Samsung HMD Odyssey with Microsoft, there was only one goal in mind; create a high performing headset that’s easy to set up and can transport people to the incredible world of virtual reality.

“Powered with dual AMOLED displays which Samsung is known for, that result in vivid colours and the highest resolution in the industry, built-in spatial AKG headphones, inside-out tracking, built-in microphone, and quick, responsive motion controllers, the Samsung HMD Odyssey immerses users with a 110° field of view as they discover the new frontier of Windows Mixed Reality.

“Samsung is committed to working across platforms to build cutting-edge technology, and we’re excited to partner with Microsoft to shape the future of virtual reality. But most of all, we can’t wait for you to take the Samsung HMD Odyssey out for a spin and see it for yourself.”

We’ve followed the trail of breadcrumbs pointing to yesterday’s reveal, from leaked pictures and FCC filings to Microsoft’s own store letting the cat out of the bag before its event. It’s great to have the information confirmed and we must say that the Odyssey is now at the top of our WMR wishlist.