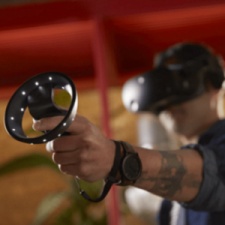 Launched last year at £595, the G2 continues to occupy the sweet spot between the affordability of the best-selling Quest 2 from Oculus and the $four-figure performance of the Valve Index.

The 2160 x 2160 pixels per eye resolution was - and still is - a revelation for players looking to ditch the screen door effect and give their eyeballs a treat in VR; particularly for the price. And while it was a mighty headset indeed, all was not as well as it could be in G2 land.

The G2 revealed more graphical clarity for AAA games like Half-Life: Alyx, but disappointing controller tracking made it a hard sell for shooters or Beat Saber high score chasers in need of exacting input accuracy. Thanks to its superior display, the G2 remains a favourite for sim racers and pilots with dedicated hardware controllers.

To address the shortcomings, HP has announced a trio of new upgrades that include improved vertical controller tracking, increased AMD compatibility, and expanded eye relief customisation.

In a blog post last week, Alex Klug, product manager HP Reverb G2 said, "We know when it comes to controller tracking, good isn’t good enough, which is why over the last year we have refined our tracking capabilities, so users have the same great experience no matter what game they are playing".

Vertical tracking volume is up by 30% compared to the original and HP claims that it has resolved blind spots above and below the waist.

The second improvement saw HP work with AMD to resolve connection issues that some users experienced. All new G2 headsets will be sold with a new and improved 6-metre cable, which existing owners can purchase separately.

The third update includes an all-new facemask design that enables users to adjust their eye relief distance to ensure they can better dial into their visual 'sweet spot'. This new facemask now includes a removable spacer that enables users to set their eye relief distance to either 15mm (with spacer on and as fixed on original headset) or 9mm (with spacer off).

In the post, Klug also details new WMR features from Windows, the most notable of which being the ability to bypass the Windows Mixed Reality virtual home environment and jump directly into SteamVR.

Coming in the midst of a flurry of VR hardware announcements, these upgrades are welcome news indeed, further cementing HP's dominance of VR hardware's middle ground. But will it continue to have the space all to itself if Oculus reveals the much-anticipated Quest 2 Pro at Facebook Connect event later this week?