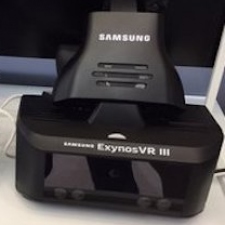 Attendees at Mobile World Congress Shanghai 2017 have been treated to their first sight of Samsung’s all-new standalone VR headset. The prototype is powered by an ExynosVR 3 series chip that supports dual Wide Quad HD (WQHD) resolution of 2560×1440 pixels at 90fps.

The Eyes Have It

The Exynos-powered all-in-one incorporates eye-tracking technology that has been developed for mobile VR by Korean company, Visual Camp. The company claims that it has developed, ‘The most powerful mobile eye tracking technologies for VR HMD’. The tech specs state accuracy within one degree, less than 1 millisecond latency and a CPU occupation rate under 4% on Samsung’s Exynos E8890 Processor.

The news was first released by the K-ICT Born2Global Centre, a Korean government agency under the Ministry of Science, ICT and Future Planning (MSIP), that aims to promote Korean tech start-ups on the global stage.

Visual Camp CEO Suk Yunchan said, "By collaborating with Samsung Electronics, our technology was internationally recognized at MWCS 2017, enabling us to secure a bridgehead for future global marketing efforts. Now, we will continue promoting the high quality of Korean start-up technologies and products overseas."

No announcement has been made regarding a release date.