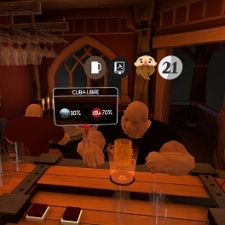 Finnish VR games studio, Catland, will release its first game on Steam Early Access on 17th October. Taphouse VR places players as the bartender in a fantasy tavern full of drunken dwarf customers. The gameplay centres around serving and mixing drinks while trying to manage horrendously behaving customers at the same time.

Catland CEO Tomi Toikka said, “Taphouse VR is the single best drunk dwarf bartender simulator on the planet. It’s like ‘My Summer Bar’. If you want to experience a horrible approximation of night life after 1 AM in a local drinking hole, boy do we have a game for you”.

Taphouse VR is being developed for the HTC Vive, with potential future platforms coming after Early Access. The team at Catland aims to provide constant content updates and exciting feature additions such as additional taverns and drink recipes during its time in the Early Access program.

Catland is one of six studios selected to take part in the first Nordic VR Startups accelerator program. You can find out about the other studios in the program in our article.

The developers will be at XR Connects Helsinki later this month with a playable build of the code if you want to get a sneak peek of the game. Taphouse VR will also be one of the games competing in the VR Indie Pitch for the chance to win thousands of dollars of marketing for the game.