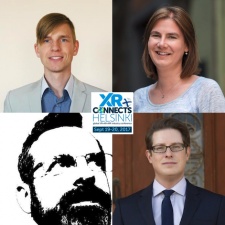 Right now, the hot topic is Augmented Reality. From the tremendous success of Pokémon Go, all the way through to predicting Apple and Google’s next moves, it seems everyone in the industry is talking AR - including us.

Not only have we rebranded our shows from VR Connects to XR Connects in order to give Augmented Reality and Mixed Reality the spotlight they deserve, but we’re also taking it a step further when we arrive in Helsinki on September 19th and 20th. How you ask? Well quite simply by having an entire conference track dedicated to all things AR.

Here are just some of the confirmed speakers for the AR track:

What better way to start, that with our AR Superstar Session, brought to you by none other than Wargaming's  Tracy Spaight, who will run attendees through how they used Hololens and Tango to create an Augmented Reality experience for the Bovington Tank Museum. Spaight will show examples of how they were able to make the impossible possible by bringing an ultra-rare SturmTiger tank right into the heart of the museum, and share some of the lessons they learnt.

We also have Claire Boissiere and Russ Harding from Conspexit Games Studio with their session entitled Innovation and Believability in AR. They'll take the audience on a journey through the challenges they faced while working at PlayStation on their groundbreaking AR games EyePet and the Harry Potter companion title, WonderBook: Book of Spells. They’ll also talk about how they're taking AR out of the living room and onto the streets to utilise AR to help the visually impaired.

Finally, we can also reveal that Šarūnas Ledas from Tag of Joy will join us to discuss how true innovation in gameplay and interaction can be achieved through AR. He'll share observations and experiences gained designing and developing their location-based AR game, Monster Buster: World Invasion. This will include tackling questions such as how to tell engaging stories in AR; how to deal with session length in location-based AR games; and how to expand your audience and keep people engaged beyond keen walkers?

Of course, that’s not all the AR that will be at XR Connects Helsinki 2017. We’ll have AR on the expo floor, AR pitchers, and even more AR talks to look forward to. There’s also an AR panel for attendees to keep an eye out for and we’ll reveal the panellists very soon.

With two full days of talks and panels, this is just a sneak peak of what we’ve lined up for XR Connects Helsinki. We’ll reveal more in the coming weeks, as we take a deep dive into all four tracks, which include XR University, XR Business, Future Visions, and our stand-out Superstar Sessions.

And there will be much more than the conference tracks at XR Connects; there’s a mountain of activity and events to keep even the most prolific networker busy for the whole of the two-day show:

We'll reveal more XR goodness as we get closer to the show, but don't wait to book your ticket - Early Bird tickets are available are still available until Monday, offering a heavily discounted rate off the standard price.