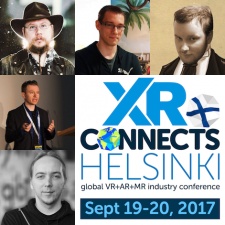 One thing we’re extremely proud of here at Steel Media is our love and support for the indie community. Whether that’s giving developers worldwide a platform to shine through our leading Big Indie Pitch competitions that now include not only mobile, but XR and PC too, or through our editorial coverage across the likes of Pocket Gamer, The Virtual Report, and now PC Games Insider, we love indies, and think there’s a considerable amount that the industry at large can learn from these pioneers.

That’s why at this year’s XR Connects Helsinki, we’re continuing the trend of putting the indie development community front and centre. Just check out a selection of the Indie talent that will be taking to stage to share all their VR/AR/MR tips and learnings.

Jon Davies from Coatsink will be kicking all things indie off with his keynote talk which will be exploring just what it took for Coatsink to build an RPG from scratch for VR.

Lasse Liljedahl from Iceflake Studios will be discussing how it's possible to take a great game and only make it better with Virtual Reality.

Jedrzej Jonasz from Mythical City Games will then continue this trend by looking at their mobile/desktop title Battle Field 2, and how they ported an existing game successfully to VR.

Adam Robaszyński-Janiec from House of Fables, on the other hand, will be looking at just what it takes to successfully build for VR from the ground up, through the lens of their existing titles The Wrath of Loki and Trans VR.

Veli-Pekka Kokkonen from 3rd Eye Studios will be continuing the trend of VR developmental learnings by exploring the challenges 3rd Eye Studios faced when it came to designing immersive VR experiences without breaking that all-important fourth wall.

Steffen Roemer from Applanga then takes a slightly different trend by taking to the stage to discuss not just how, but also why it is so important to localise your VR games and experiences for different markets.

Marko Järvi from Evocat Games will also be taking a different approach, when he talks about just what exactly you need to take into account when developing an arcade-specific build of your game.

Finally, we also have The XR Indie Dev Power Panel to close off our indie packed offering within the XR University track. The above Liljedahl and Jonasz will put in another appearance, but they'll be joined by the likes of Juhana Kotilainen from Silvermile Entertainment and Ricardo Haratani from Lucky You Studio for what promises to be a candid and insightful panel.

These indie devs are just one contingent of the speakers we have joining us for this year’s XR Connects Helsinki on the 19th and 20th September. You can find details of other confirmed speakers on the XR Connects website, where you’ll also find the full agenda when it is revealed, covering five packed tracks; Superstar Sessions, XR University, XR Business, Future Visions, and the brand new AR-focused track The AR Lounge.

We’ll have more reveals right here on The Virtual Report in the coming weeks, but if you’ve seen enough already then you can grab one of our reduced price Mid Term tickets right now.