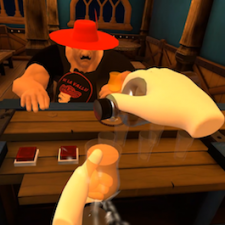 Finnish VR studio, Catland Studio, has released its debut game, Taphouse VR on Steam Early Access today. In Taphouse VR, the player gets to be the bartender in a fantasy tavern, making drinks recipes and pouring ale for misbehaving drunk dwarves.

CEO Tomi Toikka said, “Developing Taphouse VR has been quite the journey for us. Going to Early Access means we get to gather valuable community feedback and with the game being free, we get a large audience to build the game with.”

The initial launch of Taphouse VR features three taverns to work in and many different drinks to mix, pour and pummel around the counter. The crazy customers play games, get into bar fights and order outrageous amounts of alcohol.

The game has two modes: Normal mode, where you bartend for a set time limit and get a rating based on how well you fare, and Sandbox – a free mode ideal for showcasing the game to your friends and family.

Catland took part in the recent VR Indie Pitch Helsinki, where Taphouse VR picked up an honourable mention from the judges, with Brynley Gibson saying, “There’s something undeniably addictive about serving wave after wave of burly bearded dwarfs”.

Taphouse VR on Steam supports the HTC Vive and the Oculus Rift with Touch controllers from today. Later on, the game will also support Windows Mixed Reality headsets. The game requires motion controllers and room-scale setup to play.

The game can be downloaded from Steam free of charge now.