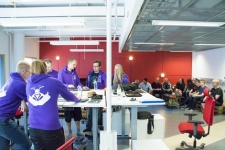 The international business incubator, Nordic VR Startups, has now finished its first application round. After receiving almost 70 candidate applications, six companies have been chosen – five Finnish firms and one Swedish company that are all working with VR and AR innovations.

The Nordic VR Startups team looked for firms that had integrated VR and/or AR technology into their product. Other significant criteria that affected the final selections included a clear demonstration of strong teamwork and core competence that is on par with international standards.

A New And Fast-Growing Market

Harri Manninen, one of the acting directors of Nordic VR Startups, is pleased with both the results of the application process and the high quality of the candidates saying, ”Overall, we received a huge amount of highly qualified applications, but the selected companies really distinguished themselves during the evaluation process. There seems to be a demand for our program since the market is new and growing fast in Nordic countries”.

The firms have now moved into the incubator facilities, with the program reaching its peak during the Demo Day at Slush 2017 in Helsinki, where the start-ups get to pitch their offering and business ideas to a group of investors and other commercial partners.

Introducing the teams selected for the Nordic VR Startups program:

Immersal is developing an AR-based infotainment product that enables navigation, matchmaking and gaming in different environments such as fairs, malls and stadiums. For businesses, the AR platform provides new and innovative ways to reach customers through marketing communications by utilising the virtual space of fair centres and other venues. Immersal currently employs eight AR specialists.

Advrty is a Swedish team of mobile gaming and advertising professionals that are developing a VR/AR-based platform for integrated advertising solutions. The goal of the company is to create a new market for advertising that does not interrupt the user experience but becomes part of it instead.

Pikseli Arcade is the first VR-based entertainment venue in Nordics, where the customers may play games and watch short films with VR headsets. In addition to Pikseli, Virva VR has launched their own software that is designed for managing daily business and various VR content at the arcade.

Catland is a Finnish game developer that specialises in Virtual Reality. The game studio is known for its Taphouse VR bar simulator that is currently under development.

Evocat is a game studio founded by eight students from Kajaani, Northern Finland. The team has been previously awarded for its original title, Nemesis Perspective, that will be getting a sequel in the near future. The studio aims to produce top quality VR experiences for players all around the world.

The founders of HipFire Games have a background in working with renowned game developers such as Supercell and Housemarque. The Finnish game studio is currently working with their latest VR title which integrates strategic gaming elements into a First person shooter.

Nordic VR Startups is a joint venture of the Japanese games company gumi and Nordisk Film. The goal of the incubator program is to identify and support promising Nordic VR/AR technology firms on their way towards the global market. In addition to seed funding and other resources, the program helps the involved companies to grow through an extensive network of mentors and industry experts.